Television distribution agreements can be complex and multi-faceted, particularly for a creative company with a variety of license deals. Akin Ogboye offers a beginner's guide to distribution rights and royalty reporting.

Some show business is art, but most of it is business. An independent producer has a continuing reporting obligation to the network or broadcaster once the programme has been delivered.

This can be tricky to navigate, so here's a simple guide to some of the factors to consider in the financial reporting relationship between the commissioning network, and the reporting production company or independent producer, in a television distribution agreement.

Six areas to watch out for in a television distribution agreement

So, you've pitched your amazing idea to a producer or a production company and the producer has pitched the idea to a network. The network is excited about the idea and has agreed to greenlight your project for production.

The producer will now sign a production deal with the commissioner, often including a distribution clause. The deal essentially says the commissioner will pay the producer an amount of money to produce the show, often called the license fee.

In exchange, the commissioner will gain exclusive rights for a certain period to broadcast the show in the particular territory. But, the producer will retain the distribution rights, which means the producer can sell the finished show across the globe after the exclusive domestic license period. This is known as the secondary rights.

In exchange for granting the producer the distribution rights, the commissioner is entitled to a share of all future revenues generated from the sale of the show. 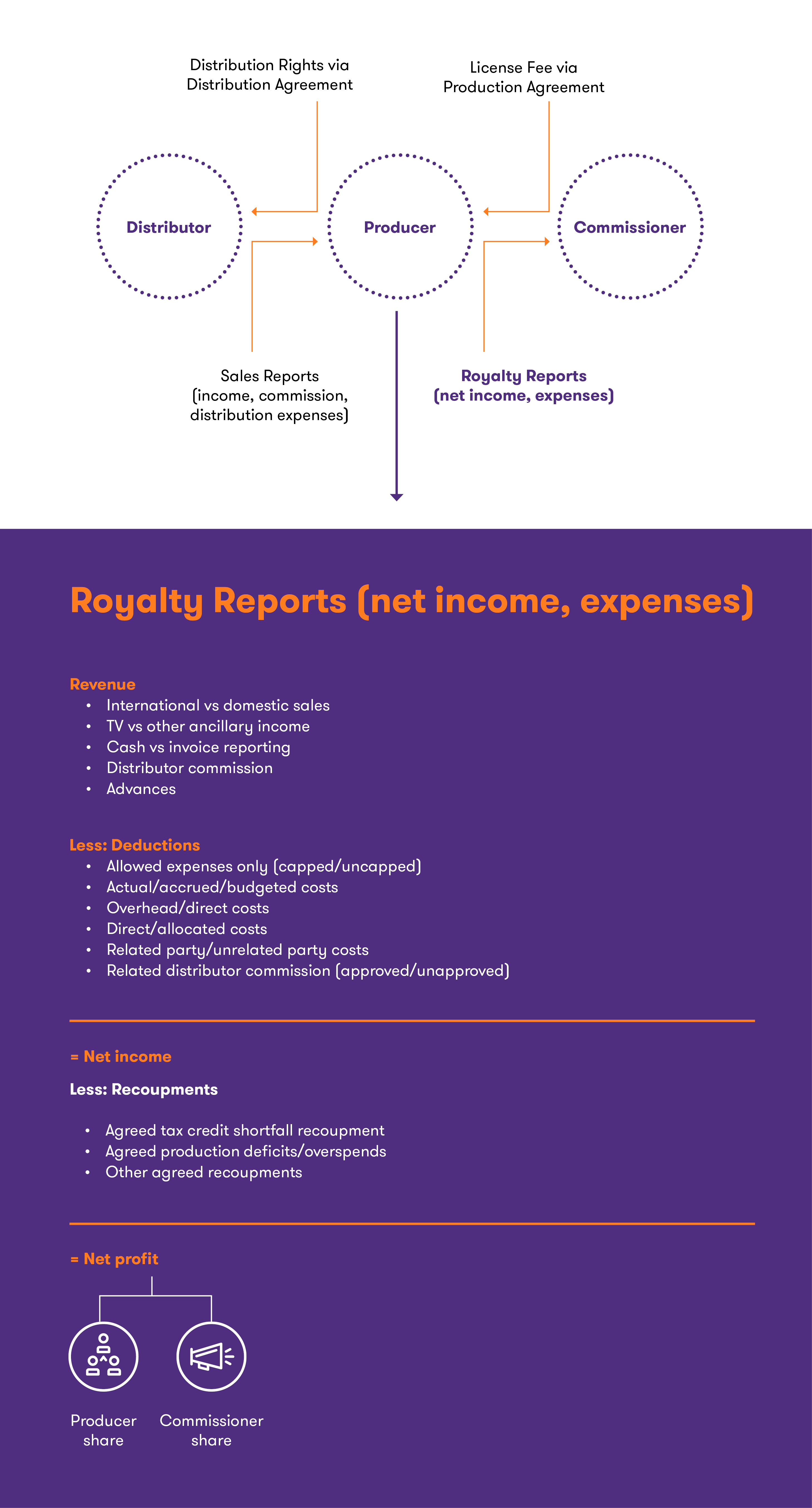 As if that wasn't complex enough, there are various issues you need to watch out for as you navigate your television distribution agreement. I've outlined six things to consider below:

One of the most important elements of a television distribution agreement is the royalty rate - the revenue share between producer and commissioner. This may sound simple enough, but it has been the subject of many contentious discussions.

It's important to clarify which rates apply to which ‘secondary rights’. These allow producers to exploit shows in other markets, formats (cable, satellite, VOD, merchandise, in-flight etc) and territories, so the producer must ensure there are robust systems in place to calculate the royalties payable on each income stream.

It's also crucial to clarify whether gross revenue for the purpose of royalty calculation comprises amounts invoiced or cash received, as this identifies who will bear the risk of bad debts.

Since the commissioning network has exclusive rights for a period and can hold back the sale of the programme in the exclusive period, the producer will often need to seek a holdback release from the network, should they wish to distribute the programme within this period.

The holdback release is often granted by the commissioner, subject to a higher royalty rate. Sales in the exclusive period should, therefore, be separately tracked by the producer to minimise the risk of royalty underpayments.

Domestic sales in the commissioner’s territory would often attract a higher royalty rate, even after the commissioner’s exclusive license period. Therefore, royalties accruing from international territories must be tracked separately.

Distribution expenses that may be deducted should be clearly spelt out in the agreement. In particular, the requirement that the costs must be actual, directly attributable to selling the show and exclude general overheads, should be explicitly stated.

Where there is a cap on distribution expenses, producers must ensure that their calculations take account of this.

Where the distributor and producer are related entities, there is often a requirement for the commission agreed between the parties to be approved by the network. The producer must ensure that evidence of this approval is retained to minimise the likelihood of disputes.

Our reviews indicate that producers tend to apply standard commission rates across all sales instinctively, without due regard to the contractual requirement to seek approval for affiliate sales. An easy mistake to make, but it may result in significant under-reporting.

Although, generally, the only deductions allowable are distribution commissions and expenses (ie items related to distribution), the network may allow the producer to recoup certain production costs.

These may include production overspends, producer advances and specific third-party investments. In addition, the agreement may stipulate that any surplus tax credits (ie surplus to those expected when the production budget was agreed) must be shared with the network.

The producer must ensure that the thresholds set out in the agreement are considered when calculating net revenue and that additional production overspends must be agreed in writing in order to be considered allowable.

Cross-collateralisation is another important element of TV agreements.

Where a show has more than one series, the agreement may stipulate that costs or profits relating to one series may not be netted off (or cross-collateralised) against another series. This might especially be the case where there are different stakeholders between the series.

The producer must ensure that processes are in place to identify contracts where cross-collateralisation is not permitted and to account for them accordingly.

Agreements must be clear about when royalty statements are due. It's also important that any penalties for late reporting or payments are spelled out to avoid disputes.

Where a producer is required to issue a royalty statement at specified dates, irrespective of whether revenue was actually generated in the period, this fact should be stated in the agreement. Otherwise, the network is left guessing as to whether a lack of reporting is due to a lack of revenue or delinquency.

The commissioner should consider including a required royalty reporting template into agreements to ensure that desired information is provided.