Despite an unsettled environment for business over the past year, Indian companies continued to make a significant contribution to the UK economy. Anuj Chande summarises our India Meets Britain tracker 2020, which delivers strong evidence of the enduring partnership between the two countries.

Our research has identified almost 850 Indian companies operating in the UK, with combined revenues of £41.2 billion. Together, they paid £461.8 million in corporation tax and employed 110,793 people. While the revenue and tax figures are lower than for 2018, they still remain strong in the context of Brexit uncertainty through 2019, and a challenging business environment for India during the same period.

As in previous years, London is the preferred location for Indian companies based in the UK. This year, 54% chose the capital as their base, with the north attracted 14% of companies and the south, 11%. 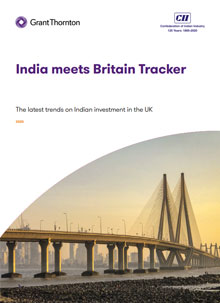 Tracking Indian investment in the UK

On 7 May 2020, over 200 business leaders in the UK and India attended our webinar to hear about the latest trends of Indian investment in the UK.

Watch our webinar to learn which are the fastest-growing Indian companies in the UK as well as the top India employers.

During this session, our guest speakers launched our new report:

Our 2020 research findings are published under the shadow of the COVID-19 pandemic. As the world addresses the immediate challenge of minimising loss of life, the economic consequences of the pandemic are only just coming into view. However, the UK’s Office for Budgetary Responsibility has warned the UK economy could shrink by 35% in the second quarter of 2020.1 The International Monetary Fund has forecast economic growth of 1.9% for India in 2020–2021, compared to substantial higher rates in prior years. This is in the context of a forecasted 3% contraction of the global economy due to the COVID-19 epidemic.2

Against this backdrop, we are advising our clients to follow a three-stage approach to developing their COVID-19 response across different areas of their business:

The COVID-19 pandemic has diverted attention from the UK’s ambition to negotiate a trade deal with India. Nevertheless, a deal is still very much a priority for the UK post-Brexit. Although it will take some time to negotiate, India and the UK have been working on ways to improve trade for the last two years and have agreed to put in place building blocks that will eventually aggregate into a trade agreement.3 New bilateral working groups in food and drink, healthcare and data services indicate where the two countries see most potential.

If you would like to discuss any matters arising in this publication or find out more about our work with Indian companies investing in the UK, please contact Anuj Chande or Chandru Iyer.