With opportunities in M&A likely to increase in a post-COVID-19 world, Katy Mattingley outlines the latest trends in merger control.

Merger control continues to play an important role in the regulatory landscape for M&A as there is continued appetite for strategic deals that result in industry consolidation. Given that the merger control process can be lengthy and costly, having experienced advisers can ensure a smooth process.

Following our insights issued in and , we continue to report on an annual basis on the five-year trend in merger cases filed with the Competition and Markets Authority (CMA). Key trends in the current period comprise: 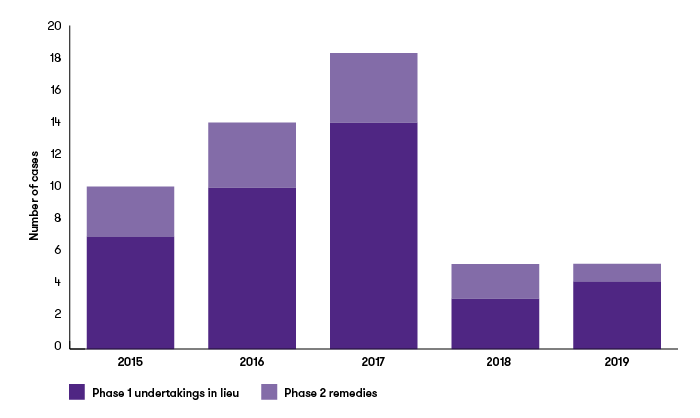 This trend could imply that parties are seeking to gain early insight into the CMA’s view on the merger. Notification means they can avoid any merger control surprises, which can be costly in terms of delaying the transaction, potentially requiring remedies or ultimately prohibition should the CMA find competition concerns.

Once the CMA opens an investigation into a completed merger, it can issue interim measures to ensure no further action is taken to merge the two businesses pending the result of the merger investigation. The CMA can either issue an Initial Enforcement Order (IEO) or an Interim Order (IO) during Phase 2's more in-depth analysis. The CMA can also issue these on anticipated mergers – mergers that are notified to the CMA – if the CMA considers that the two businesses have ceased to become distinct.

The standard IEO requires the merging parties do not take any action that could lead to the integration of the businesses, transfer the ownership or control of the businesses or otherwise impair the ability of the businesses to compete independently in any of the markets affected by the transaction.

Increase in use of monitoring trustees under IEOs

The increased use of monitoring trustees following an IEO indicates that the CMA is becoming more concerned that merging parties are not heeding interim measures. This is further evidenced by the recent emergence of cases attracting fines for breach of interim measures, including the highest fine to date in August 2020 of £300,000 in the JD Sports/Footasylum merger.

Between 2015 and 2019, the CMA required the appointment of a monitoring trustee in 20 cases:

Should the CMA find that the merging parties have breached interim measures, it has the power to impose fines of up to five percent of worldwide turnover. Until relatively recently the CMA had not used these powers, but following the Electro Rent fine in June 2018, this has been increasingly used as a deterrent – seven different merger cases in 2019 were penalised for breach of interim measures.

This shows how critical it is to ensure that parties fully understand the hold-separate requirements of the interim measures and are fully transparent with the CMA on the level of integration at the time of the IEO/IO and the ongoing interactions.

Following a merger investigation, the CMA has several options on how to proceed:

The percentage of cases cleared with remedies (UIL or Phase 2 remedies) remains low while the percentage of cases withdrawn/cancelled or prohibited has increased from 2018 levels. The withdrawal/cancellations related to a number of cases in the retail and wholesale sector, indicating the ability for consolidation, are limited in these sectors without remedies. The requirement for remedies in these cases may question the economic rationale for the merger.

We have acted as monitoring trustee in more than 30 cases, reporting to the CMA (or its predecessors, the UK Competition Commission and Office of Fair Trading). This work has included advising on governance and controls to ensure adherence to interim measures during Phase 1 and Phase 2 investigations. As seen above, getting this wrong can be costly.

If you would like to understand more about our monitoring trustee services and other advisory services, please contact Craig Reed.

Find out more
Our services