The first quarter of 2021 saw a roaring return for technology, media and telecommunications (TMT) M&A, with 300 announced transactions across its main sub-sectors. Andy Morgan explains the key drivers of this strong performance and the outlook for TMT M&A.

The general recovery in M&A across all sectors from the pandemic induced nadir of Q2 2020 is a partial explanation for this strong performance, but the rush of vendors, extremely keen to complete deals in advance of anticipated but yet to materialise changes to capital gains tax, was also a major contributor. Where were these deals and who made them?

Deals happened across TMT, but there was notable activity in some specific sub-sectors, particularly in IT services. One of the notable trends from Q1 was the very high degree of interest in ‘digital transformation’-focused businesses. Some of the larger transactions include Accenture’s separate acquisitions of Edenhouse and Infinity Works, as well as Invenio’s acquisition of US peer LSI. Both trade and private equity (PE) acquirers are increasingly interested in digital transformation assets, particularly as there is a recognition that most organisations have barely started their digital transformation journey. There are still many untapped pools of work, which will additionally generate lucrative long term support requirements.

Our industries
Technology, media and telecommunications Find out how we can help you
Navigating Brexit

Looking at the private equity environment, Q1 was marked by a number of relatively large secondary-buy outs, including the acquisition of ITRS by Montagu, Opus 2 by Astorg, Investis by Investcorp, and Xceptor also by Astorg: although each business works in a very different sector, there is a clear impetus to deploy as much capital as possible with businesses that have strong economics, and driven management teams. Private equity continues to play a hugely important role in UK M&A: in Q1 standalone PE deals or PE backed businesses accounted for 61% or 185 transactions.

The trading environment in Q1 continued to demonstrate the depth of quality and technical expertise on offer, for example, CrowdStrike’s acquisition of Humio (log analytics) for an enterprise value of £280m, which is expected to provide a valuable infill of capabilities in CrowdStrike’s existing security portfolio.

There were 300 announced1 transactions in Q1 2021, an increase of 17% from Q4 2020, and an increase of 29% from Q1 2020, when only 235 deals were announced. Deals in IT services accounted for 117 announced deals in Q1 2021, compared to 78 in Q4 2020. Other subsectors' performance was broadly comparable to the last quarter, with software accounting for 123 deals, fintech for 25 and advertising/marketing services for 34. Disclosed deal value was £6.8 billion2 – a decrease from the last quarter – but this reflects the volatility of timing of specific ‘mega deals', notably the Special Purpose Acquisition Company (SPAC)-driven acquisition of Paysafe in Q4 2020.

Inflexion made a minority investment in Daisy’s Digital Wholesale Solutions Unit (at an implied valuation of £1 billion), a provider of voice, connectivity and IT services. The last few years have seen a high level of PE interest in some sectors, such as voice and IT (e.g., Focus, Arrow, Southern, Peach, GCI). The level of fragmentation in the market, and the number of buy and build platforms with new dry powder to deploy, means that this looks set to continue.

Astorg Partners completed a secondary buy out of automation software provider Xceptor at an estimated £400 million EV. Xceptor grew well and expanded both geographically and into new verticals under CBPE Capital Ltd. As productivity is a key agenda item for most businesses, it will be interesting to see its trajectory under new ownership.

Montagu completed a secondary buy out of ITRS, a company that provides network infrastructure monitoring, particularly focused on financial services, at an implied enterprise value of £400 million. The management team at ITRS did a good job of increasing quality of earnings and expanding beyond its traditional financial services vertical, under TA’s majority ownership. It will be exciting to see what the future holds for this business.

Looking at the top 10 deals (with disclosed deal information) in Q1, it is notable that 8 were PE related, and 4 were secondary transactions. This illustrates the drive for PE to deploy uncommitted capital and the relative scarcity of targets that can actually absorb it. This dynamic is on display across the entire mid-market space. In Q1, there were 41 direct PE transactions but 144 transactions involving PE-backed ‘platform’ businesses, which typically (but not always) focus on a higher volume of smaller transactions to consolidate a marketplace. 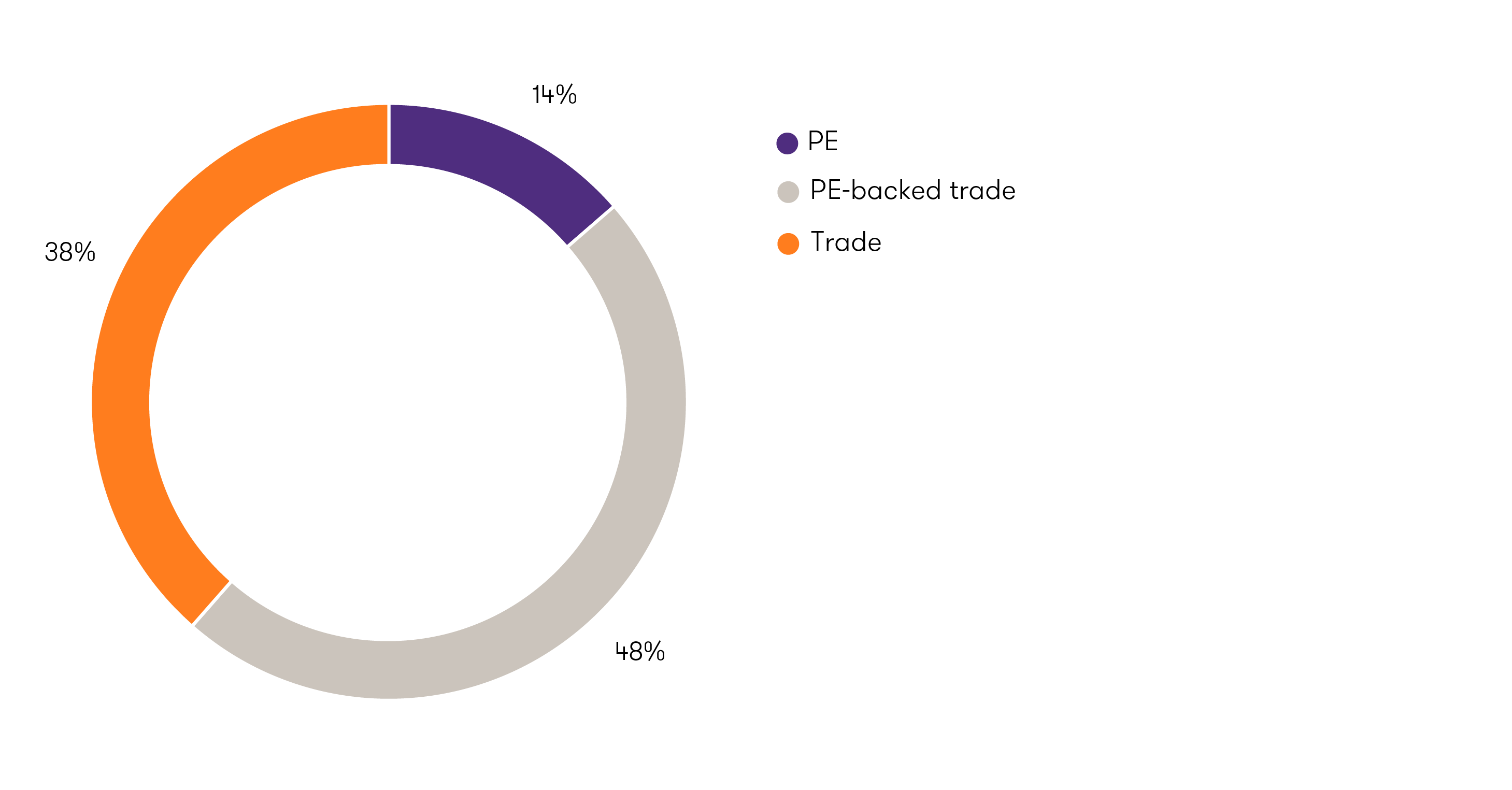 Looking towards valuation, the mean enterprise value-to-revenue (EV/R) for our four key sectors in aggregate was 3.3x in Q1. This is a slight decline from Q4 2020, but a significant increase overall from late Q1 and early Q2, when the market was impacted by the first lockdown.

Listed businesses provide the best real-time insight into both valuation and sentiment. Taking the macro view, the tech-heavy Nasdaq and the broadly focused MSCI Global Index performed similarity in Q1, with the index values up 4.3% and 5.3%, respectively. This marks the first time since the outbreak of the pandemic that the MSCI performed better than the NASDAQ over a quarterly period, due to the relatively better performance of more cyclical and 'value' sectors of the economy like industrials, financial services and a loosening of restrictions in areas like travel and leisure.

Part of the recovery in more cyclical sectors can be seen in the various TMT sector peer groups. For example, advertising and marketing services businesses were the best performers in Q1, ahead of remote-first areas such as fintech and software. 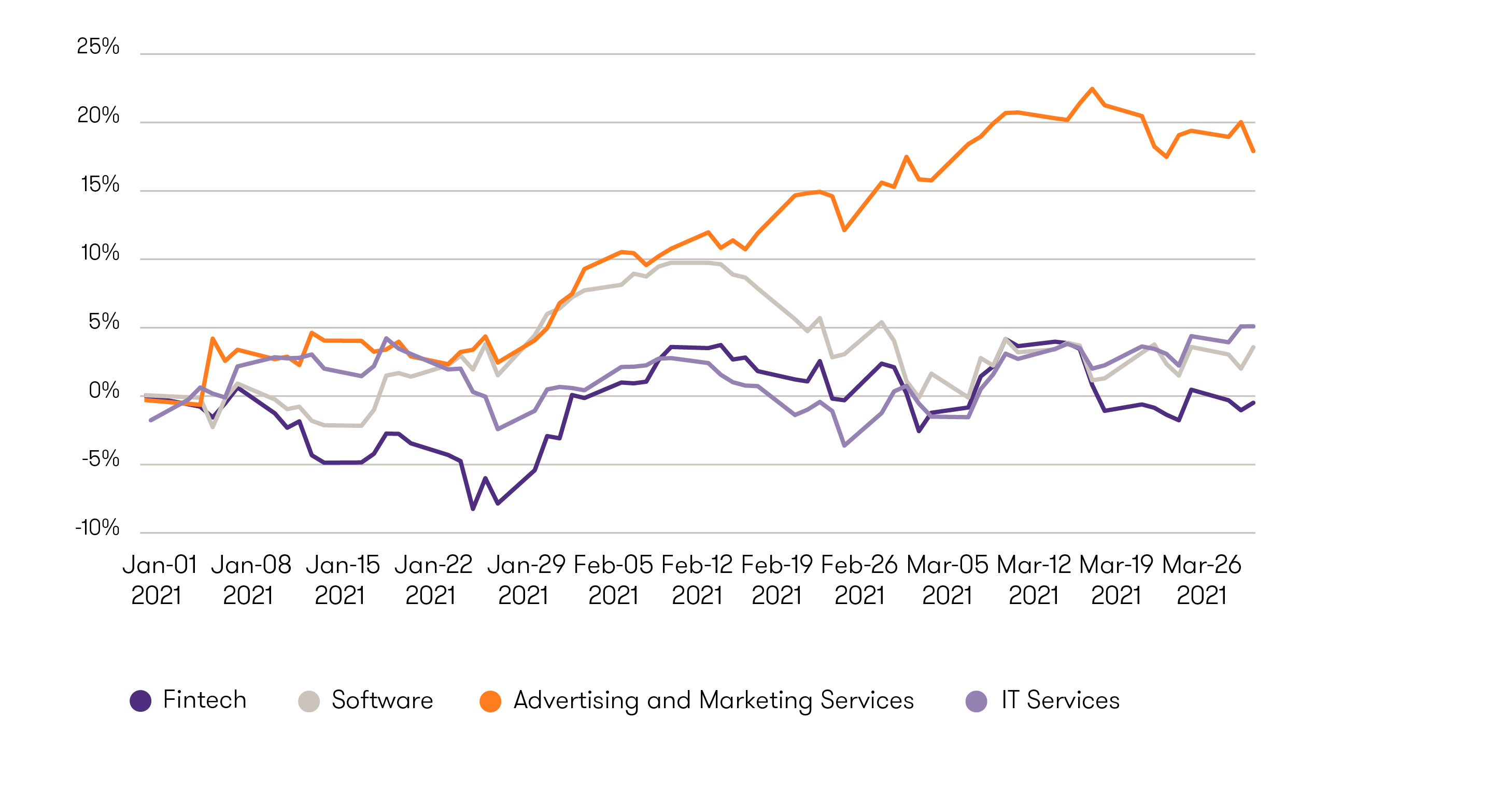 In terms of valuation, Fintech and software continue to receive robust deal multiples due to their strong unit economics and growth prospects. The strong global valuation environment has encouraged a flurry of UK focused listings. For example, at the end of March, UK focused ActiveOps listed on the alternative investment market (AIM) at an implied 5.5x EV/revenue – a nice example of an ambitious UK mid-market business undertaking an IPO – especially as 2020 was characterised by significant take private activity (e.g. Huntsworth, Cello, IMImobile – among others).

Reopening: a boost for TMT investments

2020 was an interesting year due to the division of performance between traditional person-intensive and asset-intensive businesses and newer remote-capable and tech-enabled businesses. In broad terms, the latter category managed to adapt, and some parts thrived. However, for every Zoom-style success story, there is a less recognised clutch of companies that need to go out and meet customers to sell and implement their products. Lots of TMT businesses even recognise that social ties need to be renewed and want their developers, creatives, and managers to meet and collaborate. Reopening will no doubt be useful to this group, which will begin to feed into the M&A market as restrictions are loosened in the UK.

If you would like to start a conversation about any aspect of M&A in technology, media and telecoms, please contact Andy Morgan.

2 Deal values are mainly sourced from corporate websites. However, if no press release is available, they are sourced from deal databases including Capital IQ, Megabuyte and Mergermarket, or from press commentary released at the time of the deal. Deal values may subsequently be amended as further detail is released by the acquirer.

3 This figure shows the preceding 90 days rolling average EV/revenue, for transactions with deal information in the public domain. The individual time series for fintech and advertising and marketing services not shown due to the lower volume of transactions.