Could the venom of a spider change the way hospitals function and upset the health infrastructure programme? Matt Custance looks at how spiders could change the way we use our hospitals.

In a year of pandemics, murder hornets and firestorms, it seems darkly appropriate to be talking about venomous spiders, even as a bland commentator on public sector health infrastructure policy.

Why venomous spiders? All will be explained. And in a 2020-like twist, they're actually the good guys here.

We need to start though, with the UK’s health infrastructure programme, the biggest re-invigoration we’ve seen in hospital infrastructure in the last decade.

Originally, 40 hospital builds across 27 trusts, the list is rumoured to be growing and is being accompanied by other new investments like the recent announcement of funding for A&E.

The impact of this investment on the quality of NHS services will be profound. For the first time in a long time, health infrastructure is being taken very seriously at all levels of the NHS. And it’s shining a light on our approach to construction business cases and hospital design.

One of the things being highlighted is our approach to flexible design. This is one of the points I made in an article about a year ago. And there are a couple of aspects to it.

Firstly, are we building health infrastructure that can cope with a shift in demand? For example, away from cardiothoracic and towards oncology? Or away from outpatients and towards inpatients? Can we easily and cost-effectively repurpose space?

Secondly, is our business case process flexible enough to cope with the following proposition?

'I know I’m going to need 600 beds (or 80,000m2), but I can’t tell you exactly what those beds or that space will be doing, by specialty, for the next 20 years, because demand and clinical innovation are shifting faster and faster - and so needs will change in unpredictable ways.'

It’s a real problem because our business case process is set up to expect NHS Trusts to be able to predict long-term demand by department in order to build up their demand and capacity models and therefore revenue and affordability estimates. This stuff goes to the heart of how we decide whether new health infrastructure is affordable. But what if we can’t?

And that’s where the Fraser Island funnel-web spider comes in.

Not as dangerous as their Sydney counterparts, they are still a member of the four most lethal families of spiders in the world. And they may, one day, save your life.

The research is being led by Professor Glenn King at the Institute for Molecular Bioscience, home of the world’s largest collection of venoms. In a nutshell, Professor King has isolated a small protein in the venom of the funnel-web spider that promises ground-breaking improvements in the treatment of stroke, heart attack, and for protecting transplant organs.

Usually, I leave the clever clinical and operational advances in health to my far-more-qualified colleague Malcolm Lowe-Lauri. As a former panel member for The National Institute for Health and Care Excellence (NICE), he is far more capable to speak to these advances. However, I’m fortunate to be one of the Trustees of the University of Queensland UK Trust, which raises money for the University of Queensland, and as a result, I am often exposed to some of the ground-breaking research that the university does.

Effectively, the protein that Professor King has found stops the process of cascading cell death that follows from a heart attack or stroke, which means that the damage done by a stroke can be stopped, by the administration of this molecule.

Results in rats suggest that the impact of a stroke could be reduced by up to 80% if administered in the first four hours. It’s even effective eight hours after a stroke. And there’s reason to believe the results could be better in humans. This could lead to the development of stroke treatments which could be delivered by paramedics and stop the effect.

More than that, this molecule is likely to have the same effect of stopping or reversing cell death in heart attack victims too. It also seems likely to mean that transplanted organs could be transported with little or no damage. 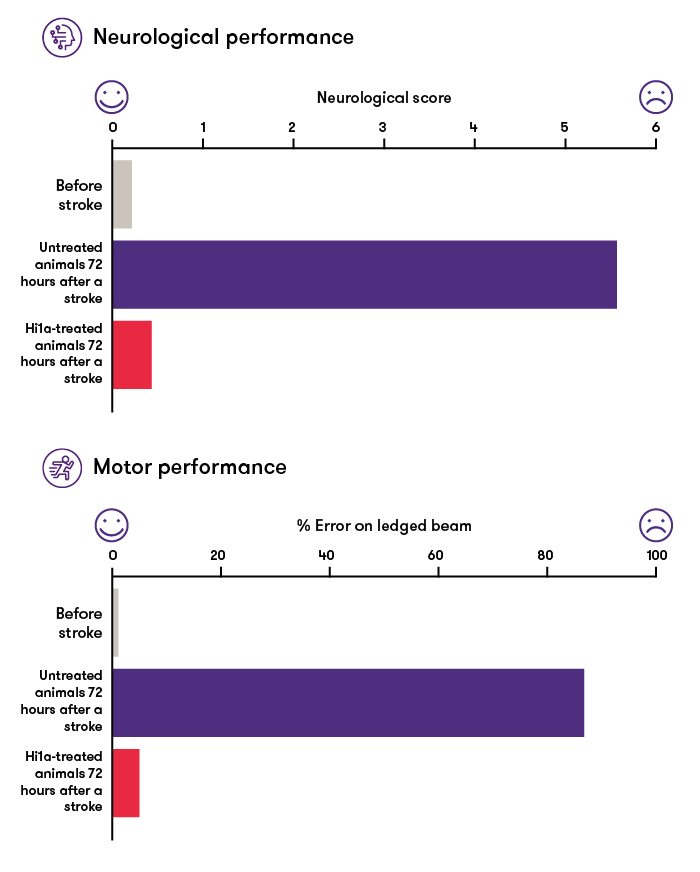 Source: Institute for Molecular Bioscience, The University of Queensland

Health infrastructure will change with science

When you think about that, this single development could fundamentally change treatment of stroke and heart attack and make transplants much more viable. And that means that health infrastructure will have to change with the science.

We will need substantially fewer bed days for heart attack and stroke, so fewer beds. Meanwhile, for transplants, there could be a number of offsetting effects. More viable transplants could be carried out, so more beds and theatres will be needed for them. However, fewer operations will be cancelled which would reduce bed occupancy per patient.

Of course, the demand for transplants might reduce if more people are able to avoid long-term problems through administration of the drug. But we may be able to harvest organs that were not previously considered suitable because of better survival of those organs during transplant.

So, when I go back to the new health infrastructure business cases I have on my desktop and check out the demand and capacity forecasting, what does this mean?

New treatments are emerging every week that could radically change the demand for beds in a particular speciality or department. We can’t realistically pretend that we can forecast those volumes with any certainty – not beyond five years.

So, what can we say?

We can say that the cost of healthcare has consistently risen in real terms every year since the dawn of time. We can say that the demand for health infrastructure has not gone down, regardless of new medical and pharmaceutical innovation.

Number of outpatient attendances in England

Data excludes patients who did not attend.

Average number of occupied beds per day in England

Day only bed figures include number of beds across general & acute, maternity and mental illness.

So one way or another, we are going to need space in hospitals and we know that we will need to fund that space – but let’s not pretend that we can be too exact about where and how it will be used.

To discuss the UK’s health infrastructure programme further, get on touch with Matt Custance.