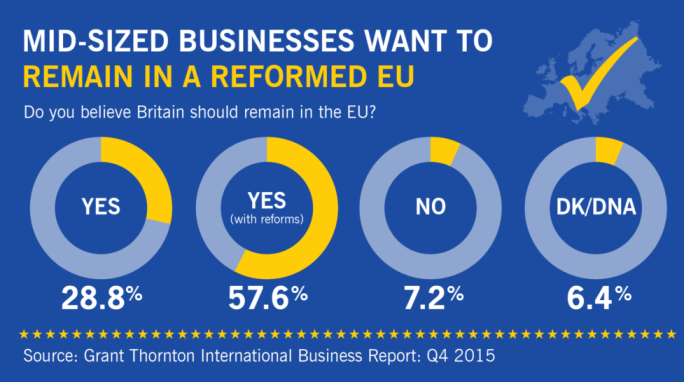 Based on a survey of 125 senior MSB business leaders, the research finds that 90% of respondents believe reforms to the UK's relationship with the EU are needed (56% strongly agreeing and 34% agreeing).

In terms of the reforms, most businesses pointed to cutting the amount of red tape from Brussels (84%) and the ability of national parliaments to work together to block unwanted European legislation (80%) as priority areas for reform. Nearly three quarters (74%) believed the repatriation of powers by UK parliament from Brussels were needed and 60% called for further restrictions on benefits to those moving inside the EU. Less than half (47%) were concerned with ensuring the UK is no longer subject to the concept of 'ever closer union'.

Despite the calls for reform, those surveyed were largely in favour of Britain remaining in the EU, with a total of 87% agreeing so. However, only 29% of these believed this should be 'unconditional' (reformed or unreformed), whereas 58% believed Britain should remain in the EU only if the Prime Minister achieves a newly negotiated package of reforms. Only 7% of respondents believed Britain should leave the EU unconditionally.

Robert Hannah, chief operating officer at Grant Thornton UK LLP, commented: "Britain's dynamic mid-sized businesses have long been the oft-overlooked bellwethers of commercial and economic shifts in the UK, given their prominence and contribution to oiling the wheels of our economy. The fact that they're overwhelmingly in favour of Britain remaining in a reformed EU should give the government added confidence in its negotiation of demands, as the PM seeks a deal with other EU heads of state. With the referendum debate set to heat up over the coming months, it would be remiss on either camp's part to not pay attention to this vital voice."

Respondents were also asked what effect they believed a Brexit scenario would have on their businesses' growth prospects. 58% were 'unsure' of the likely impact, whereas only 6% believed it would be positive and nearly a quarter (24%) believed it would have a negative impact on growth.

The research forms part of a series of inquiries to be carried out by Grant Thornton over the coming months, to better understand the views of the public, private and voluntary sectors and help inform the referendum debate.