New research from Grant Thornton’s International Business Report (IBR) finds that the majority of mid-sized businesses (MSBs) in the UK have commenced preparations for the March 2019 departure from the EU, with most factoring in a ‘No Deal’ scenario into their plans. The research shows that only around a fifth (22%) have done no planning, believe they don’t need to plan or still are unsure whether they need a plan. This compares with nearly three-quarters (73%) of MSBs who had done no planning when surveyed six months earlier. 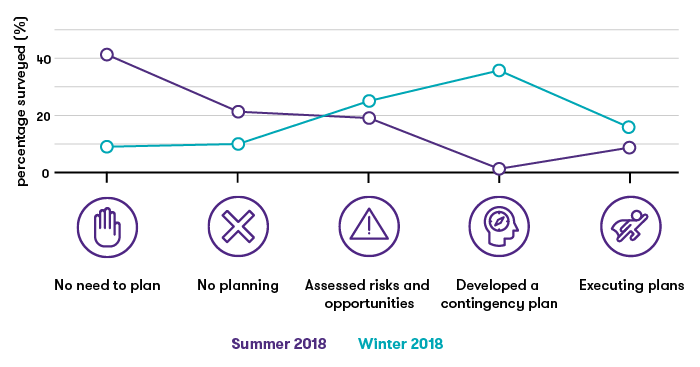 Of the majority (78%) who have made Brexit plans, many are still in the early stages of assessing and identifying the risks and opportunities Brexit poses (25% from 18% earlier); or have developed a contingency plan (36% from 1% earlier). A significant number (17%) have already started to implement their contingency plans (from 9% earlier).

The research also finds that those businesses who have conducted some degree of planning are largely factoring in an ultimate ‘No Deal’ scenario into their plans, whereby the UK and EU fail to reach an agreement and the UK defaults to trading on WTO terms. Nearly three quarters (74%) include a ‘No Deal’ scenario in their plans, from an earlier 56% of the minority who had done some planning at the time.

Businesses were also asked about their confidence in the UK and EU agreeing an outcome that is ultimately positive to their business. Nearly half (45%) of businesses expressed a degree of confidence in a positive outcome (from 28% earlier).

Andrew Howie, partner and head of international at Grant Thornton UK LLP, commented: “Over the past six months, businesses have realised they can no longer afford themselves a ‘wait and see’ approach to preparing for Brexit and have started to take the necessary steps to fortify their operations. As the UK government itself steps up its ‘No Deal’ contingency planning, businesses would be wise to plan for the worst, whilst still hoping for the best.

“With around 100 days to go until the UK leaves the EU, and an agreeable deal yet to surface, the prospect of the UK crashing out of the EU in a ‘No Deal’ situation seems likelier by the hour. Since the August bank holiday, we’ve seen a sustained increase in demand from mid-sized businesses looking for advice – particularly in ‘No Deal’ scenario planning: identifying their exposures, developing plans and putting them into action now in order to ensure legal compliance and operational continuity come 29th March 2019.

“We are finding that those businesses that are actively planning are much more confident about their outlook, with clarity on where Brexit impacts them and where it doesn’t. Many of those taking a more pragmatic approach are then moving on to focus on medium-term plans, redesigning their operating models to mitigate costs and support growth. They are even looking at their competitors’ exposures to assess relative advantages and scope for M&A opportunities in more turbulent market conditions.

“Businesses have spent the bulk of the past two years awaiting steer from governments on both sides of the negotiation, but they’re clearly unable to wait much longer and are taking action in the absence of a clear Brexit roadmap.”

Learn about our Brexit advisory services.