With a combined turnover of £9.8 billion and over 20,000 employees, the top 30 Chinese companies in the UK are making an important contribution to the UK economy and will be vital to the economic future of the UK post-Brexit, according to the fourth edition of the Grant Thornton UK LLP Tou Ying Tracker which identifies the fastest-growing Chinese companies in the UK.

This year’s tracker is divided into two categories, separately analysing the top 16 state-owned enterprises (SOEs) and top 14 privately-owned Chinese companies in the UK. This latter group reflects the ever-changing nature of Chinese overseas investment and the growth of China’s thriving private sector. In fact, the tracker shows that these private Chinese-owned UK companies grew by 210% on average, whilst SOEs achieved average growth of 146% over the last year. These impressive growth figures illustrate that the UK continues to be an incredibly attractive destination for Chinese investment and a key market for Chinese companies to achieve growth.

Simon Bevan, Head of the China Britain Services Group at Grant Thornton and one of the tracker’s authors, commented on the potential of private companies for unlocking both China's and the UK’s economic futures, saying: “Harnessing the vast potential for investment from China may be one of the keys to a vibrant and sustainable economic future for the UK post-Brexit.

“According to a report by China’s Administration for Industry and Commerce (AIC), there are around 77 million registered companies in China, of which an estimated 150,000 have the potential to grow into international businesses and invest overseas. The 280 companies currently established in the UK are therefore merely the tip of the iceberg.”

Analysing the growth of the top Chinese SOEs and privately-owned businesses separately has unearthed a number of interesting differences, shedding light on the diverging focus of Chinese investment into the UK by SOEs and private companies.

With an average age of 48, the Chinese companies in the UK have younger boards than UK listed companies (which according to Spencer Stuart research average 52 for executives and 59 for non-executives) – and the Chinese average of 48 is drawn from an age range of 25 to 75.

Simon Bevan commented: “Whilst this is a small sample, Chinese companies in the UK should find the results encouraging, especially considering the well-documented benefits of diversity at all levels of a business.”

However, 30% of all the Chinese-owned companies in the UK were late in filing their annual accounts at Companies House. This is one of those aspects of governance and responsible corporate citizenship which is readily quantifiable and it is unfortunate that it sends a signal of less compliant behaviour than UK law expects.

Brexit and future of Chinese investment into the UK

Brexit has introduced uncertainty into the future suitability of the UK as an investment market and should give Chinese investors food for thought as they consider the impact on their sectors. This year’s tracker argues that this uncertainty will inevitably have an impact on M&A, potentially causing some transactions to fail or be postponed, although this may prove to be a temporary slow-down depending on the outcome of the Brexit negotiations.

However, Grant Thornton’s tracker also argues that the UK remains open for business and continues to provide a stable legal and regulatory environment, a large international talent pool and a competitive tax regime. In a recent survey of UK companies by the China-Britain Business Council, 56% of the respondents stated that leaving the EU would create “more” or “many more” business opportunities with China.

Simon Bevan struck an optimistic tone when commenting on the future of Chinese companies investing in the UK post-Brexit, saying: “Since the result of the EU Referendum, there have been some significant investments involving Chinese investors and Chinese capital. Real estate deals – residential and commercial, investment and development, London and national – have continued to be completed and projects such as Hinkley Point are evidence that the UK remains an attractive business destination for China.

“The UK government will undoubtedly seek to maintain the competitive nature of the UK and its trading relationships and has signalled its intent to provide a smooth transition and to maintain legal and regulatory stability.” Commenting on the drop in the value of sterling, Bevan said this “may continue to offer opportunities for investors, as do government plans for increased infrastructure investment.” 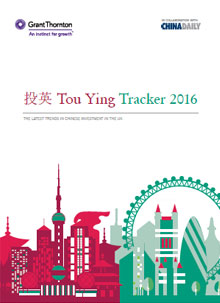