According to the latest research conducted by business and financial advisory firm Grant Thornton UK LLP, overseas investors are demonstrating an increased appetite for UK and Irish firms in the food and beverage sector.

Grant Thornton’s analysis shows a jump in the number of UK and Irish businesses acquired by overseas investors, accounting for over a third (34%) of deals (13 of 38) completed this quarter. This compares to 18% of deals in the previous quarter (8 of 44), and 24% of deals (13 of 55) in Q1 2016. With the weakening of the pound following the EU referendum result, overseas investors’ interest in UK companies has been heightened by the fact they can pay 15% - 20% less for assets.

The largest deal in the last quarter was the acquisition of Tyrrells by US-based Amplify Snacks for £300 million, also reflecting the current demand in the market for premium snacks.

Overall, the total number of deals recorded in Q3 2016 declined a modest 14% compared to the previous quarter, with 38 deals versus 44.  This also represents a 38% fall when compared with the same quarter in 2015 which reported 61 deals. The total disclosed deal value for this quarter was £560 million, with no mega-deals reported.

"We have seen continued interest from overseas investors this quarter, which has been an increasing trend in the food and beverage sector in recent years. With the EU referendum result prompting the recent devaluation of sterling we have seen a further boost in appetite as the UK has become more price competitive and attractive to overseas investors. The sterling's recent drop in value also offers further opportunity for the sector through exports. A more competitive exchange rate can help boost British companies' export performance which, when focused on and prioritised effectively, is proven to drive companies’ success.

"Although Brexit negotiations have yet to commence, the impact on the labour market is already being felt. The sector relies heavily on overseas labour and finding enough skilled workers is already a challenge as the majority of domestic workers are reluctant to take on manual labour in the sector. If a significant number of EU workers leave the UK, then we will see an increased pressure on wage levels as labour shortages become even more acute.

"Despite a slight decline in deal activity this quarter it is too early to draw conclusions as to whether this is due to the EU referendum result, since many deals would already have been underway prior to the vote. Although some transactions may have been put on hold due to the current uncertainty, many companies are unlikely to postpone their development plans for at least two years while we wait for negotiations to conclude. Food and beverage is a resilient sector and the underlying drivers of M&A are strong and so we expect that this slow-down in activity to be temporary." 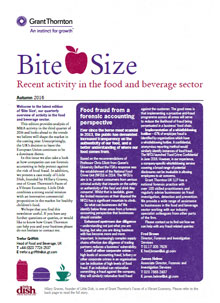