M&A activity in the food and drink sector remains strong

According to the latest research conducted by business and financial advisory firm Grant Thornton UK LLP, after a robust end to 2015, M&A activity in the food and beverage sector remains strong, with 51 deals completed in the first quarter of 2016, an 11% increase on the same period last year.

Cross-border deals decreased by 8% this quarter compared to 2015 overall. However, a continued appetite for internationalisation is evident as 12 of the 19 cross-border deals completed involved overseas investment in the UK. There has been particular interest from Asia with Nissin Foods taking a 19.9% stake in Premier Foods, and deals between Itochu and Transmar, and Nishimoto Trading and Harro Foods.

The report also found that there were four deals in the soft drinks space, including Rebel Kitchen's acquisition of raw coconut water brand Unoco and  The Natural Beverage Company acquiring the Fairtrade cola manufacturer Ubuntu, both deals demonstrating the continued trend in the sector for acquisitions of Fairtrade, natural and perceived 'healthier' products.

“Concerns about the new sugar tax have yet to deter investment in the soft drinks sector. Uncertainty around the upcoming EU referendum brings with it questions around existing trade negotiations and increased import costs for food and drink firms. However, since the UK is a net importer of food, in the case of Brexit, we could see an increase in the consumption of British food, which, whilst the sector environment may change, could be good news for British producers.

”We have seen some really interesting deals in the last quarter. In the midst of

McCormick’s attempt to acquire Premier Foods and being rebuffed

three times, Japanese instant noodle maker Nissin Foods was successful in accumulating a stake. The partnership gives Premier Foods access to Nissin’s innovative products to distribute in the UK, as well as access to new global markets. As the year continues, we expect to see more innovative deals from overseas companies, regardless of the concerns around the EU referendum and UK sugar tax.” 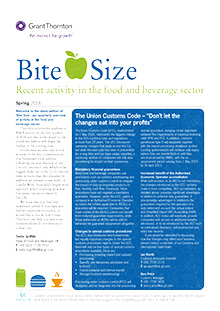