Merger and acquisition (M&A) activity in the first quarter of 2016 has slowed slightly, according to the latest Insights into Facilities Management report by leading business and financial adviser Grant Thornton UK LLP. The decline in activity is primarily attributed to a slowdown in the domestic market.

Notable deals this quarter in the private equity (PE) sector included Rubicon Private Equity taking on the utilities and services contractor Enserve from Cinven for a reported c.£60 million. PE investment has slightly increased this quarter although investors appear to have become more selective, and are showing more interest in buy-and-build platforms than pure play organic growth-driven assets.

Usman Malik, M&A Partner at Grant Thornton UK LLP commented "Following a strong end to 2015, M&A activity has fallen this quarter. This slowdown of activity demonstrates how the FM sector may already be starting to feel the uncertainty caused by the upcoming EU referendum on June 23. The potential impact of a 'Brexit' and the resulting restrictions on free movement of labour into the UK cannot be ignored. Concerns about the potential impact on the operations of players in the FM sector and their supply chains, generally reliant on a more transient workforce, remains to be seen." 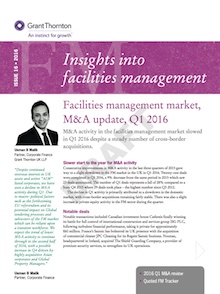