M&A activity in the bars, restaurants and casual dining sector remains robust, despite B.....

Grant Thornton UK LLP’s latest ’ review of M&A activity within the hospitality sector shows that activity remains steady, despite the uncertainty created by the Brexit vote and other market pressures. The report broadly attributes the strength of M&A activity to both continued private equity (PE) and trade investment in a sector which remains resilient and cash generative.

The review finds that there were 74 deals completed in 2016. While the total number of transactions is very similar to the previous two years, 2017 saw a leap in total disclosed deal value. Total disclosed deal value rose from just over £1 billion in 2015 to £2.7 billion in 2016, although this figure is somewhat inflated by Heineken’s provisional agreement to purchase Punch Taverns, in a potential deal worth £1.8 billion.

PE investment continued to perform strongly this year with 19 transactions, representing 25% of the total deals completed. PE transactions this year included Kings Park Capital taking a significant stake in 7Bone, a casual ‘better burger’ concept restaurant, and Business Growth Fund investing in Glasgow-based Asian restaurant chain Bar Soba. Will Baxter, Head of Hospitality at Grant Thornton UK explains: “Private equity will continue to invest in smaller brands with ambitions and potential for a roll-out, as they look to identify the next strong casual dining brand.”

In addition to PE investment, trade acquirers also picked up in 2016, such as South African-based Famous Brands, owner of the Wimpy burger chain, who acquired Gourmet Burger Kitchen for £120 million.

Whilst the bars and pubs sector remains highly susceptible to economic fluctuations, confidence remained strong in 2016 with a welcome boost being provided by Heineken’s offer to acquire Punch Taverns. If this deal goes ahead, a significant proportion of the UK’s pubs will be owned by the Dutch brewer. In addition, the latest Greene King Leisure Tracker shows that Brits are favouring pubs as evening dining destinations, slightly ahead of restaurants and significantly ahead of fast food outlets.

Although consumers are becoming increasingly concerned with health and wellness, the review shows that Brits still enjoy a good curry. Indian restaurants have always been popular, however in the past few years they have gone from strength to strength. New entrants are establishing growing chains and offering new twists on an established cuisine. Dishoom, the first Bombay-style café opened in Covent Garden in 2010, now has restaurants in Shoreditch, King’s Cross,Kingly Streetand Edinburgh, its first location out of London. The success of Indian restaurants is in no way confined to London, with successful operators outside of the capital including MyLahore and Mowgli.

Operators are also seeking to appeal to consumers’ growing appetite for ‘more than a meal’ when they eat out. Increasingly, consumers, in particular millennials, are seeking out-of-home entertainment and unique experiences that cannot be recreated at home. 2016 saw a rise in venues offering ‘eatertainment’: entertainment alongside a food and drink offering, as well as alternative formats such as street food markets.

Will Baxter said: “Consumers are drawn to new formats and often it is emerging operators with single, or a handful of sites, that can be more nimble and innovative in their offering. This has resulted in the rapid growth of street food markets, pop-up street food outlets and pop-up bars, both in and out of London. For example, in November, Boxpark launched a Croydon version of its pop-up mall constructed of shipping containers, with a diverse range of food outlets.”

Commenting on the future of the hospitality sector in 2017, Will Baxter said: “There is no doubt that 2017 is going to be an interesting year for operators as a result of the uncertainty surrounding Brexit, wage cost and business rate rises, and weaker Sterling. Despite this, there remains optimism amongst the uncertainty, volatility and competition.”

Will Baxter went onto say: “One certainty however is that the sector will continue to draw a healthy level of M&A, from both trade and private equity acquirers, with as ever, a number of high-profile assets with processes already underway as we go into 2017.” 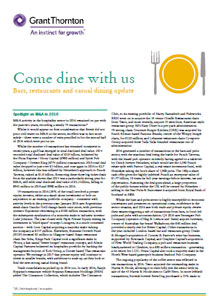