A new report, India meets Britain Tracker 2018: The latest trends on Indian investment in the UK, published by Grant Thornton UK LLP in association with the Confederation of Indian Industry (CII), reveals that Indian companies remain integral to the long-term growth of the UK economy.

The report, which monitors Indian businesses operating in the UK with an annual revenue growth of 10% or more, shows that the 87 fastest growing companies achieved an average annual growth rate of 44%, with seven companies seeing turnover growth of more than 100%.

This year’s tracker sees an increase of nearly 60% in companies making the list (55 in 2017) and a 13pp increase in annual growth rate (31% 2017) showing the growing strength of Indian businesses operating in the UK. Of the 87 that made the list, 22 featured in last year’s list with one-third of the total number recording a growth rate of over 50%. 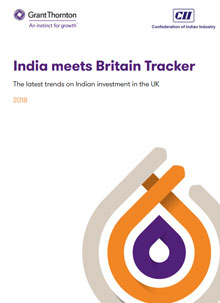 Companies in the technology and telecoms, and pharmaceutics and chemicals sectors have again featured strongly and this year make up 20% and 16% of the list respectively. For the first time, this year, companies from the engineering and manufacturing sector came joint second in the number of companies in the Tracker.

Uncertainty over the outcomes of Brexit negotiations does not appear to have negatively affected Indian companies’ enthusiasm for the UK as an investment destination and around 800 Indian companies are now operating in the UK.

Whilst combined turnover (£46.4bn) and employment numbers (105,000) remained stable year-on-year, appetite for investment has risen.  The UK attracted four of the top ten largest European deals, as Indian  corporates were able to take advantage of up to a 20% fall in the value of the pound against the rupee since the UK’s vote to leave the EU. Moreover, investment by Indian companies already  in the UK has increased, with capital expenditure (capex) rising from £4.25bn in 2017 to £4.69bn this year.

This year’s report also identifies operating profits of £2.25bn for Indian companies operating in the UK and a combined corporation  tax contribution of £360 million.

At a time where, in the face of Brexit, there are concerns that companies will leave the city, London has strengthened its dominance as the leading destination for Indian investment in the UK. Of the fastest growing Indian companies, over half are now based in the capital, up from 44% in 2017 and 39% in 2016.

“Indian companies are going from strength to strength in the UK, with this year’s tracker showing a nearly 60% increase in companies making the list.  A key factor of their success is that they have established themselves in growing markets where they have the relevant expertise for example, in the technology and telecoms sector and this year, in particular, the engineering and manufacturing sector.

“The report clearly shows that the UK remains a highly attractive destination for Indian investors. Following the Brexit vote, the UK economy is in a period of flux as it looks at how to reinvigorate its role as a global trading nation and seeks to forge new trade deals.

“With India’s growing wealth and increasingly important role on the world stage its position in the Commonwealth is growing, coinciding with the UK’s aims to revitalise trade and investment  with Commonwealth countries. The UK cannot overlook the significance of the Indian economy (set to be the third largest in in the world by 2030) and must ensure that, beyond Brexit, it remains a leading investment destination.

“With trade deal negotiations only being one part of the puzzle, the UK must focus on what it can offer beyond its current role as a gateway to Europe. It must showcase its expertise in design, engineering, technology and financial services if it wants to safeguard continued investment in to the economy. Pivotal to this is maintaining key areas such as the unique residency/domicile taxation principles for Indians here for limited periods and also creating a visa regime that enables students and professionals to bring their skills to the UK.

“The recent announcement of the new UK-India Tech partnership, created to identify and pair businesses, venture capital, universities and others to provide access routes to markets for British and Indian entrepreneurs and small and medium enterprises is hopefully a nod to a future relationship that is stronger and more substantial than ever.”

“At a time where the UK is forging a future outside of the EU it will be looking to strengthen its ties with long-standing partners like India. The Indian economy is forecast to grow substantially and what the UK must focus on is both creating new and maintaining existing investment opportunities as it competes for India’s investment on a global platform.”