On International Women’s Day a new report, based on Grant Thornton’s annual survey of 5,500 businesses in 36 economies, reveals that the proportion of senior business roles held by women in the UK has fallen from 21% in 2016 to 19% in 2017.

This marks only a 1% increase when compared with the first survey conducted in 2004 (18%), showing how little progress has been made over the past decade.

Meanwhile the percentage of businesses in the UK with no women in senior management has also risen from 36% in 2016 to 41% in 2017.

Globally, the proportion of senior business roles held by women has hit a high of 25%. However, the findings again show that progress is slow, with an increase of only 1% compared to 2016.

Sacha Romanovitch, CEO at Grant Thornton UK LLP commented: “It’s encouraging to see that globally we have seen some improvement in the proportion of senior business roles held by women, however it is moving at a painfully slow rate. We know that diversity is central to shaping a vibrant economy in which people and businesses thrive. Diversity means there is a greater variety of ways of thinking opening organisations up to new perspectives. The diversity agenda is all about creating an environment that is conducive to all and what women see of leadership isn’t always that attractive. To this end we need to see a fundamental shift in what leadership looks like and what is expected of people in senior leadership positions.

"Established notions of leadership are letting women down. The ‘hero model’ of leadership, where the individual commanding must be perfect and the job all-consuming, is still extremely prevalent, whilst  more collaborative and inclusive  forms of leadership are  overlooked. This is a real concern as it suggests businesses are squandering the full potential of their people. Businesses need to re-balance what leadership is to make it attractive to future leaders who expect the role to be interesting, meaningful, flexible and with reasonable reward too.”

The research reveals that the countries with the highest proportion of senior roles held by women are Russia (47%), Indonesia (46%) and Estonia (40%). The UK had the fifth lowest proportion of women in senior business roles, with Japan recording the lowest (7%) and Argentina second lowest (15%).

This is a significant contrast to the major economies of the G7, which have remained static at 22% of senior roles held by women and 39% of businesses with no women in senior management.

How men and women see and respond to risk

As the issue of uncertainty dominates the business agenda in 2017, , highlights the importance of gender diversity in senior teams tasked with managing risk. The research shows that men and women see risks and opportunities through a different lens, which provides a diversity of thinking when combined together.

Sacha Romanovitch added "The increase in businesses lacking gender diversity in senior management comes at a time when companies need to develop resilience in the face of global volatility and increasing levels of uncertainty. Successfully managing risk should be a key priority for any dynamic business and will be crucial in finding those opportunities to unlock their potential for sustained growth. These findings challenge the presumption that women are more risk averse than men and highlights the crucial value that comes from having their voice at senior levels.

"In the fast changing and unpredictable environment in which we live and work, business leaders need to be asking how they will build for the future to develop a resilience in the business to sustain it through the yet unknown. A vibrant economy is one in which both people and business thrive and our research points to the value diversity will bring to both.  We cannot let this message lose momentum and our research is a call to action for business to do more and to act more quickly in making it happen." 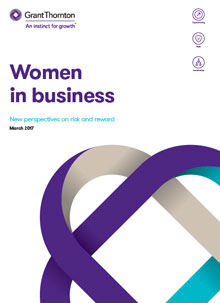