On International Women’s Day, a new report based on the annual Grant Thornton survey of 5,520 businesses in 36 economies reveals that almost four in ten businesses in G7 countries have no women in senior management positions compared to a sixth of firms in Eastern Europe. This is despite widespread public commitments to equal opportunity and an abundance of research illustrating the commercial benefits of diverse leadership.

Globally, the proportion of senior business roles held by women stands at 24%, up slightly from 22% in 2015. However, this minor uplift has coincided with an increase in the percentage of firms with no women in senior management, at 33% in 2016 compared to 32% last year.

Despite the publication and recommendations of the Davies Report, a number of high profile speeches and multiple campaigns on gender equality, the UK has marginally declined in the last year, with 21% of senior roles now held by women (down from 22% in 2015) and its highest recorded proportion of businesses with no women in senior management at 36%.

Sacha Romanovitch, CEO of Grant Thornton UK LLP, said: “We know that businesses with diverse workforces can outperform their more homogenous peers and are better positioned to adapt to a rapidly changing global business environment. Within the context of increased uncertainty and complexity, firms must resist group-think and welcome a range of perspectives in order to grow and meet the challenges of today."

Grant Thornton’s report also explores the disconnect that seems to exist between how companies approach leadership and what female leaders are looking for. It considers the motivations and drivers of female business leaders compared to their male counterparts and makes a number of recommendations for companies looking to promote more diverse leadership.

The report finds that earning a higher salary is a bigger driver for women looking for leadership roles than it is for men (28% compared to 21%). Similarly, women appear to perceive leadership skills differently to men. While communication is seen as the most important attribute of good leaders by both sexes, women are more likely to perceive this skill in terms of listening and engaging in two-way dialogue, while men are more likely to focus on broadcasting messages.

Romanovitch added: “It's important that women are as proactive as male colleagues in discussing their reward expectations – given the gender pay gap still exists, this could be reflective of women seeking monetary recognition for their work; something they cannot yet take as a given.

"Communication has for too long been thought of as broadcast; actually it's all about creating conversation and building community. Companies may recognise the need for female leadership but they must do more to transform their leadership cultures in order to attract women aspiring to senior roles. In order to create more dynamic businesses which support a vibrant economy, we need people from all backgrounds leading them.”

The Grant Thornton International Business Report (IBR) provides insight into the views and expectations of more than [10,000] businesses per year across [36] economies. This unique survey draws upon [22] years of trend data for most European participants and [11] years for many non-European economies. 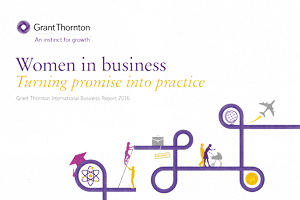