New research from leading business and financial adviser Grant Thornton UK LLP has found that 2016 has been a strong year for deal activity in the waste sector, with the highest level recorded since 2011.

The report, Annual Waste review: an ever changing landscape, found that deal activity in 2016 increased by 26% compared to 2015, with 48 deals completed. The year started strongly, with 9 deals completed in the first quarter, and gradually increased throughout the year, with 15 completed in Q4 2016.

Whilst 2015 saw no M&A activity over £60m in value, 2016 saw the beginning of a shift towards larger deals, with three recorded surpassing £60 million. The acquisition of Urbaser by Chinese investor Firion was the largest deal recorded, estimated at c.£2 billion. 2016 saw growing interest from Chinese investors in the UK and European waste management market and is a trend that is set to continue.

The analysis found that there was a shift of focus in sub-sector deal activity in 2016. Hazardous and industrial waste, and waste management, recorded the highest level of investment this year (31% respectively), overtaking recycling, which has dropped 10% from last year, down to 29%.

Within the recycling category, organic saw the highest level of deal activity (36%), increasing 3% from last year. There was also continued activity in the plastic sector (29%), whilst the wood and WEEE sub-sectors both increased activity levels from 0% to 7%.

Mike Read, head of energy and environment at Grant Thornton UK LLP commented: "2016 has proven to be a solid year for deal activity in the waste sector, with the highest number of deals recorded since 2011. Whilst the second half of 2016 was dominated by the result of the EU referendum, deal levels in the sector still continued to increase and the last quarter recorded the highest level overall.

"The increase in interest seen from Chinese investors is not surprising given the depreciation in the value of sterling which has resulted in the price of UK services and goods becoming more competitive and attractive to overseas buyers. This trend is likely to continue into 2017 as overseas investors continue to be attracted to the high growth energy from waste market in Europe.

"Whilst the impact of the Brexit decision is still difficult to judge, it could be argued that, for the waste sector, it may be beneficial for the UK in the longer term. The potential increase in the cost of buying infrastructure from the European Union may result in a shift to greater self-sufficiency within the UK.

"The waste sector has witnessed nearly two decades of massive change and with local authorities facing extreme funding pressures, such as the crisis facing adult social care, we are likely to see further upheaval in municipal waste services in order to provide further funding. Continuing to innovate in service delivery, managing the value in the supply chain more effectively, and exploring alternate markets should be top on many waste company agendas." 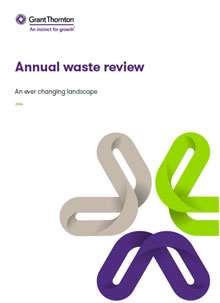