Deal activity in the food and beverage sector increases

According to the latest research from leading business and financial adviser Grant Thornton UK LLP, deal activity in Q2 2017 increased in both volume and disclosed deal value compared to the first quarter.

Grant Thornton's latest Food and beverage insights report found that 57 deals were announced in Q2 2017. This marks a substantial 39% increase on the 41 transactions recorded in Q1 2017.

After a slight dip last quarter, interest from overseas acquirers was elevated once more. This will no doubt be an ongoing theme in the sector, given that the depreciation of sterling continues to allow overseas investors to acquire UK businesses at a discounted rate. 30% of deals (17) saw overseas investors acquire UK/Irish assets in Q2.

Alcoholic beverages remained one of the most popular sub-sectors for investment with 11 deals recorded, accounting for 19% of the quarter’s activity. The biggest deal was Diageo’s acquisition of tequila brand Casamigos, for up to $1bn, illustrating the growing trend for premium spirit brands.

“This quarter’s results once again display the resilience of the food and beverage sector. With an increase in both deal volumes and disclosed deal values it is clear there is still significant interest in the sector. We have seen a pick-up in interest from both overseas and private equity buyers, demonstrating that the Brexit vote has not yet had too large an impact on the attractiveness of the sector.

“However, we are still in a period of ongoing political and economic uncertainty, heightened further by the result of the general election, and there is no doubt that investors are taking a more cautious approach to investments. But while uncertainty may have become the new norm, there are still a number of high-profile deals in the pipeline which will continue to boost deal activity, including Unilever’s auction of its spreads division later on this year. The ability to acquire assets at a discounted rate due to the depreciation of sterling, combined with the attractive assets on offer, will also continue to drive inbound investment in the UK.

“Our recent research, undertaken with the Food and Drink Federation, highlights the huge potential for future growth still present in the UK’s food and beverage manufacturing sector. Changing consumer behaviour continues to be a main driver in both innovation and growth within the sector as organisations recognise the need to adapt to meet demand.” 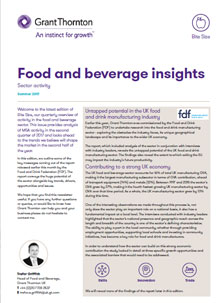