Deal activity in food and beverage sector slows in Q1 2017

According to the latest research from leading business and financial adviser Grant Thornton UK LLP, deal activity in the food and beverage sector slowed during the first quarter of 2017.

Grant Thornton’s latest Food and beverage insights report found that there were 41 transactions in Q1 2017, a 15% fall compared to the last quarter of 2016. Total disclosed deal value for the quarter was £4.3 billion, including Tesco’s proposed acquisition of Booker. Excluding this deal, total disclosed deal value came to £694 million for the quarter.

The alcoholic drinks sector continues to be an important driver of M&A activity in the food and beverage sector. Six deals were completed in the first quarter, representing 15% of transaction volume. The interest in artisan gin also continues, with two deals in the first quarter.

Trefor Griffith, head of food and beverage at Grant Thornton UK LLP commented on the findings: "Whilst we have seen a slowdown in deal activity this quarter, with the lowest deal volume recorded since the third quarter of 2014, we do not believe this indicates a drop-off in appetite in the sector.

“The fall in deal numbers is consistent with the increased uncertainty felt in the market. As the currency hedging programmes of many companies came to an end this quarter, many businesses will have spent time considering the impact the large depreciation in the value of sterling has had since last summer.

“A number of investment trends have underpinned M&A activity in the food and beverage sector over the last couple of years and these were evident once again this quarter. The wellness and sports nutrition space continues to draw trade and private equity acquirers. Consumer and investor interest in alcoholic beverages also continues to drive deal activity within the sector, with interest from both large global players and smaller operators looking to build up scale.

“Whilst food and beverage will always be non-discretionary items in the shopping basket, the ever-changing focus of consumers creates winners and losers within the sector as companies adapt to fit with the current trends in consumer behaviour. With cost pressures continuing to weigh on margins and a rise in inflation likely to impact consumer spending, it is difficult to predict which trends will dominate throughout 2017, but we are confident we will continue to see interest in the sector.” 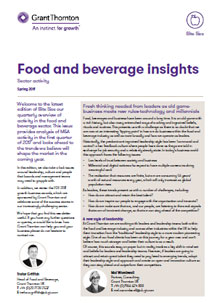