New analysis from leading business and financial adviser Grant Thornton UK LLP shows that the top issue for many (21%) family law professionals remains the increased number of litigants in person (LIPs) due to lack of public funding. This is followed by the associated lack of legal aid for most family law cases (17%) and courts not being fit for purpose (14%).

As with previous years, respondents were questioned on the top three areas in which they would like to see a change in legislation. Primarily, and consistent with 2014, respondents pointed to the introduction of no fault divorces (25%), followed by the reintroduction of Calderbank offers generally in financial proceedings (20%) and protection for cohabiting couples (19%).

Nick Andrews, Partner at Grant Thornton UK LLP, commented: "The pace of change in factors affecting divorce proceedings over the past two years has been significant. The introduction of the single Family Court last year was a revolutionary step, yet professionals still remain concerned that the court system is not fit for purpose to support LIPs. Similarly, considerable reforms to pension legislation – arguably the most significant changes in a generation – are starting to reshape thinking when it comes to the division of assets. Both of these transformations underline the importance of seeking specialist advice as early as possible."

A greater number of solicitors reported that they had seen an increase in the average age of people getting divorced (47% of responses, compared with 40% last year). Whilst the most common age of clients remains between 40 to 49 (74%), there appears to be a rising trend of older divorcees, with 15% saying that the next most common age was 50-59 (a 7% increase from last year) and well ahead of the 8% of respondents pointing to 30-39 years of age.

'Growing apart or falling out of love' remains the most common reason cited for marriage breakdown (23%), closely followed by 'extra-marital affairs' (22%) and 'unreasonable behaviour' (20%). 11 to 20 years continues to be the most common length of marriage ending in divorce with 61% of respondents. 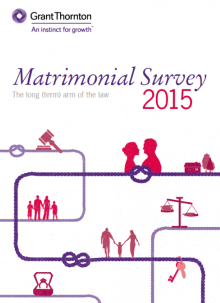