Who are China’s UK stars and how much do they contribute to the economy? Our new Grant Thornton 投英 Tou Ying Tracker 2013 has the details.

Prime Minister David Cameron arrives in China this week on a high-profile UK trade mission, putting Anglo-Chinese trade firmly in the spotlight. But how are Chinese companies faring at doing business in the UK?

According to our new Grant Thornton 投英 Tou Ying Tracker, released today in conjunction with China Daily, many are thriving and making a significant contribution to the UK economy. The tracker monitors UK businesses with Chinese parent companies to identify the fastest-growing companies by turnover (based on the latest published accounts).

Our 投英 Tou Ying 25 provides a unique insight into the business activities, locations and performance of those companies already making a name for themselves in the UK, as well as their origins and ownership.

Who are the top growth performers in 2013?

There are a number of banks, financial, technology and energy companies on the list. Download the tracker to find out the full list of fast-growth companies: Grant Thornton 投英 Tou Ying Tracker [ 1510 kb ].

What is their contribution to the UK economy?

Our tracker shows that the top 25 fastest-growing Chinese companies are making a heavyweight contribution to the UK economy – employing more than 2,600 people and generating revenues of more than £17 billion in 2012, an increase of 27% on the previous year. Even at the lower end of our Top 25 range, a year-on-year revenue gain of 9% far exceeds current economic growth rates in the UK and even those in China itself.

How is growth being achieved?

M&A activity between China and the UK has been a significant factor for a number of years. However, the Grant Thornton 投英 Tou Ying 25 shows that the growth of Chinese companies appears to be driven as much by successful organic endeavour as by acquisition – just five of the companies in the 投英 Tou Ying 25 are the result of acquisition, with the remaining 20 achieving success through organic growth.

Which sectors host the fastest growers?

Chinese overseas investment has been largely directed over the last few years to the financial services and energy sectors but the tracker shows a refreshingly broad range of sectors.

It is particularly pleasing to see strong representation not just from technology, but from manufacturing companies establishing a permanent UK presence. This reflects a resurgence in the UK’s standing as a specialist, high-end technology and manufacturing hub.

Interestingly, Chinese retailers also appear to be expanding in the UK, with retail and consumer businesses featuring prominently.

Where are they based in the UK?

Less than half of the Top 25 have chosen to set up in London. A number have set up in the North of England or other regional cities, demonstrating the success of UK regions in establishing themselves as alternative centres of expertise to attract inward investment.

The tracker, developed in collaboration with China Daily, identifies the top 25 fastest-growing Chinese companies in the UK as measured by percentage revenue growth year-on-year, based on the latest published accounts.

The tracker includes companies with turnover of more than £5 million and a minimum two-year track record in the UK that are 50% or more owned by an entity in mainland China or Hong Kong. 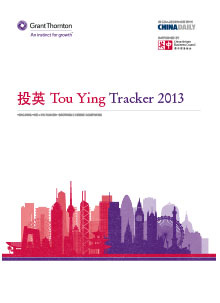 Our Tou Ying Tracker 2019 highlights the latest trends in Chinese investment in the UK.