Welcome to the second edition of Technology Insights, our quarterly analysis of M&A trends in UK software, IT services and digital transformation, fintech, and advertising and marketing services.

This edition covers the third quarter of 2020, during which tech investors returned to the table.

Q3 enjoyed a sharp uptick in M&A, despite spanning the traditionally quieter summer period, with 179 transactions – a 24% increase on Q2 2020. However, it was still down 22% on the equivalent (pre-coronavirus) quarter in 2019. The recovery was broad, with a good balance of mid-market transactions and continuing private equity (PE) and overseas interest.

Even as the second wave of COVID-19 takes hold, there remains a strong appetite for deal-making. We continue to work with entrepreneurs who want to accelerate their buy and build plans, raise growth capital and bring in new investors to fast-track growth.

There are plenty of drivers for deal activity for Q4 2020. These include the prospect of capital tax rises to help pay for the extensive government support that continues to be required as it seeks to balance healthcare priorities with economic necessity.

A backdrop of high liquidity in private capital markets (debt and equity), large corporates continuing to streamline their businesses to refocus on core capabilities and robust trading performance is placing technology businesses at the front of the M&A recovery.

As the world grapples with an opaque outlook for 2021, we expect that deal activity in the UK technology sector will hold strong and continue to drive recovery, regardless of the shape it takes.

In the report below, we outline the Q3 deals, M&A data and key trends as an indicator for what direction the market is headed in.

The range of transactions in the mid-market showcases the depth of UK technology talent and a variety of different deal drivers, from re-invigorated interest in maturing tech spaces to accelerating international expansion.

M&A valuations continue to hold up well. There is little evidence that reduced deal volume has driven lower valuations, although only a minority of transactions have valuation information in the public domain.

Of the 179 deals in Q3 2020, we identified deal multiples in 27 cases, with a mean EV/revenue of 3.7x. Quarter-on-quarter, the data clearly supports the view that valuations remain robust.

This aligns with our own experience of the market. Amid so much uncertainty, there has to be a strong strategic rationale for a deal to go ahead. With only the fittest deals surviving and marginal deals out of the picture, it follows that pricing multiples remain resilient. 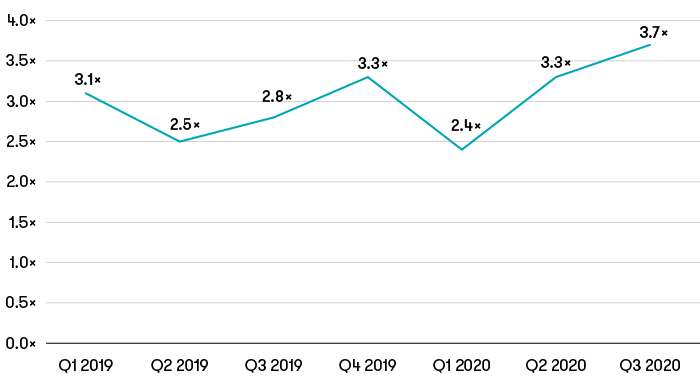 A look at the equity markets shows the continued attractiveness of the technology, media and telecom (TMT) sector relative to the rest of the economy. The tech-heavy NASDAQ index performed better than the global MSCI index during Q3, (9% versus 7%).

This difference is even more stark when looking back from the beginning of the year: NASDAQ has increased by almost 40% on an LTM basis, whereas the global MSCI index is up by just 9%. 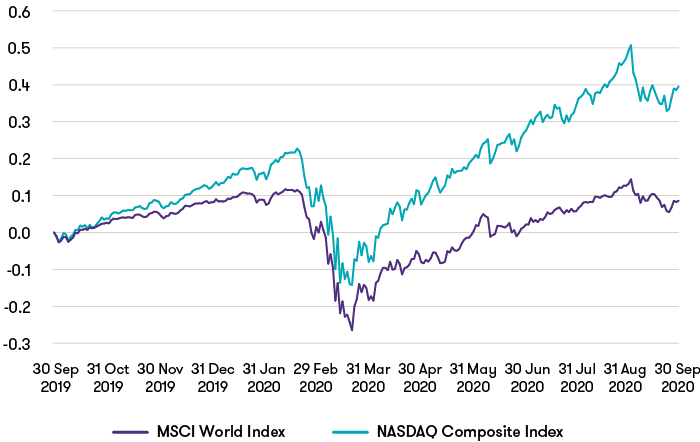 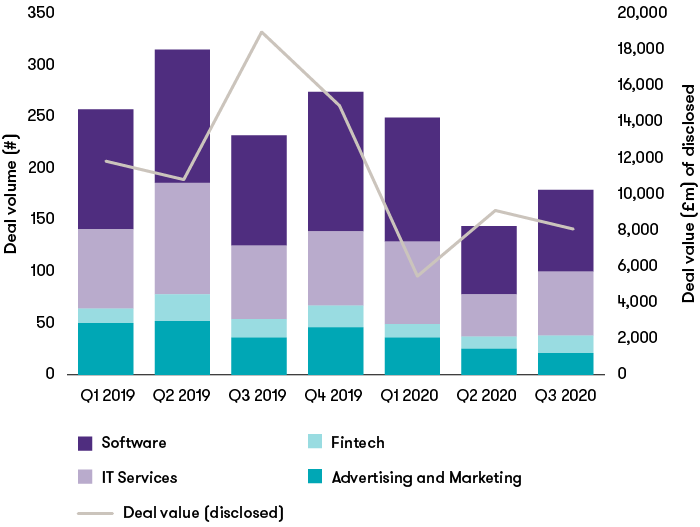 Mirroring previous quarterly performance, software accounted for the highest level of activity with 79 deals, followed by IT services (63 deals), advertising (23 deals) and fintech (17 deals).  More deals were announced in Q3 2020 than Q2 for IT services, software and fintech. Whereas advertising deal volumes saw a slight decline in Q3 compared to Q2.

In capital markets, multiples increased in Q3 across all four sub-sectors, reflecting the strength that we see in M&A valuations. Fintech and software were the highest-rated subsectors, ending Q3 with EV/revenue benchmarks of 11.3x and 9.0x, respectively. 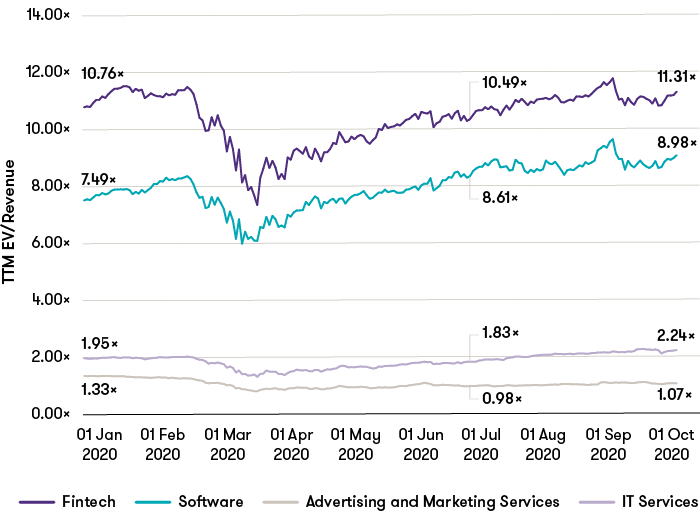 PE remains attracted to the UK TMT sector, particularly its annuity-like qualities, growth prospects and selective buy and build potential as the sector consolidates. In Q3, there were 17 direct PE investments across a diverse spread of companies. These ranged from LDC’s investment in Aker Systems3 (provision of ultra-secure cloud environments) to Arsenal Capital’s acquisition of Cello Health (medical communications).

Looking forward and our thoughts from Q3

We are optimistic that Q4 will finish as strongly as Q3.

Growth in deal volume in Q3 continues to illustrate the robustness of the UK technology industry. The market has a good balance of strategic trade acquirers (both international and domestic), record levels of PE and the increasingly aggressive return of buy and build vehicles.

Clearly, the M&A market will continue to be affected by the global economy and confidence will undoubtedly be affected by the coronavirus second wave, but opportunities still remain. Technology continues to be relatively well insulated from current events, particularly due to the mission-critical nature of many applications and the prevalence of recurring revenue models. The sector will undoubtedly be one of the cornerstones for continued recovery in M&A markets.

A select group of businesses are benefiting from a ‘new normal’ in which there is less cash, more automation, less paperwork, more remote working, better connectivity, greater consumption of over-the-top media services, video games... and more.

Even when coronavirus is consigned to the history books, these drivers will persist. Businesses that are aligned to our new way of living will not only insulate the wider TMT sector, but will help it to thrive.

2 Deal values are mainly sourced from corporate websites, however, if no press release is available, they are sourced from deal databases including Capital IQ, Megabuyte and Mergermarket, or from press commentary released at the time of the deal. Deal values may subsequently be amended as further detail is released by the acquirer.

Our industries
Technology, media and telecommunications Find out more
Article

Technology will be a shining light in M&A post-lockdown