Measuring six components across a wide range, our sustainable growth index looks at what makes a place successful. This has identified the areas of Scotland that are flourishing and why, explains Rob Turner.

Year three of our sustainable growth index has measured the factors that make a place successful, forming a roadmap to track progress and drive change. The components measured by the index go beyond traditional economics and give a broader view of growth in the UK.

The prosperity map of Scotland shows two geographic hot spots: one in the north around Aberdeenshire, including the city of Aberdeen, and the second in central Scotland spanning west to east from Renfrewshire to Midlothian including Glasgow, Lanarkshire, West Lothian and Edinburgh. The three cities of Aberdeen, Edinburgh and Glasgow are the three highest ranking places.

There is a clear corridor of dynamism emerging across the Lothian region with Edinburgh ranking first and East Lothian, Midlothian and West Lothian ranking third, fourth and ninth, respectively.

The presence of higher education will play an important role in shaping these findings, as it is often critical to driving a range of factors reflected within this basket of measures, for example innovation, research and development, and entrepreneurship.

The lower-performing areas on this basket of measures tend to be more rural and peripheral geographies in the Highlands and the south. For some of these places, this will be an issue of connectivity, but it can also be one of aspiration and opportunity.

The highest-ranked places on inclusion and equality are spread across Scotland.

The Shetland Islands, Aberdeenshire and East Dunbartonshire rank one to three. More broadly, it is the Highlands and north-east Scotland that perform strongly, with a small number of pockets of strength to the east and west of central Scotland.

Half of the areas that rank in the bottom 20% are in west-central Scotland. The challenges facing a number of these areas are significant and deep-set. Many of the areas performing poorly on this basket are also low in the health, wellbeing and happiness basket, indicating the close linkages between equality and health outcomes.

The areas in Scotland that rank most highly in terms of health, wellbeing and happiness generally fall into two types.

First, a number of the most rural areas rank highly including Orkney, Highland and the Shetland Islands. The second is areas that border the main cities of Glasgow, Edinburgh and Aberdeen. This includes Midlothian, East Dunbartonshire and Aberdeenshire ranking three, six and seven.

This year’s sustainable growth index includes trend data looking back over the past six years to indicate the direction of travel of each area. Like the overall sustainable growth measure, there is a varied geography in terms of the areas that are most likely to have improved their overall scores. This includes a mixture of areas that have improved from a low ranking to closer to the national average, driven by a range of factors and varies between areas.

Overall, Midlothian had the greatest absolute increase in ranks over the last six years, increasing by 11 places, resulting in a shift in performance in the middle 20% to top 20%.

There has been little change between last year’s index and this year's in the top 20% of areas, with the top six places remaining the same across both years. However, there were some changes to the ordering, with the Highlands moving from six to three and Perth and Kinross moving down from three to five.

For more information about the sustainable growth index for Scotland, download the report [ 1627 kb ] 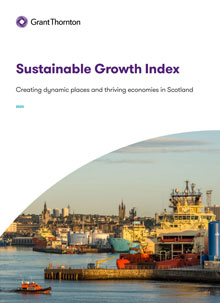