As the clock ticks down on the end of transition, organisations are running out of time to get ready for Brexit. With fewer than 100 days to go, Tom Rathborn looks at where negotiations are, what we are seeing in the market and the key things for business to focus on.

A busy few months ahead 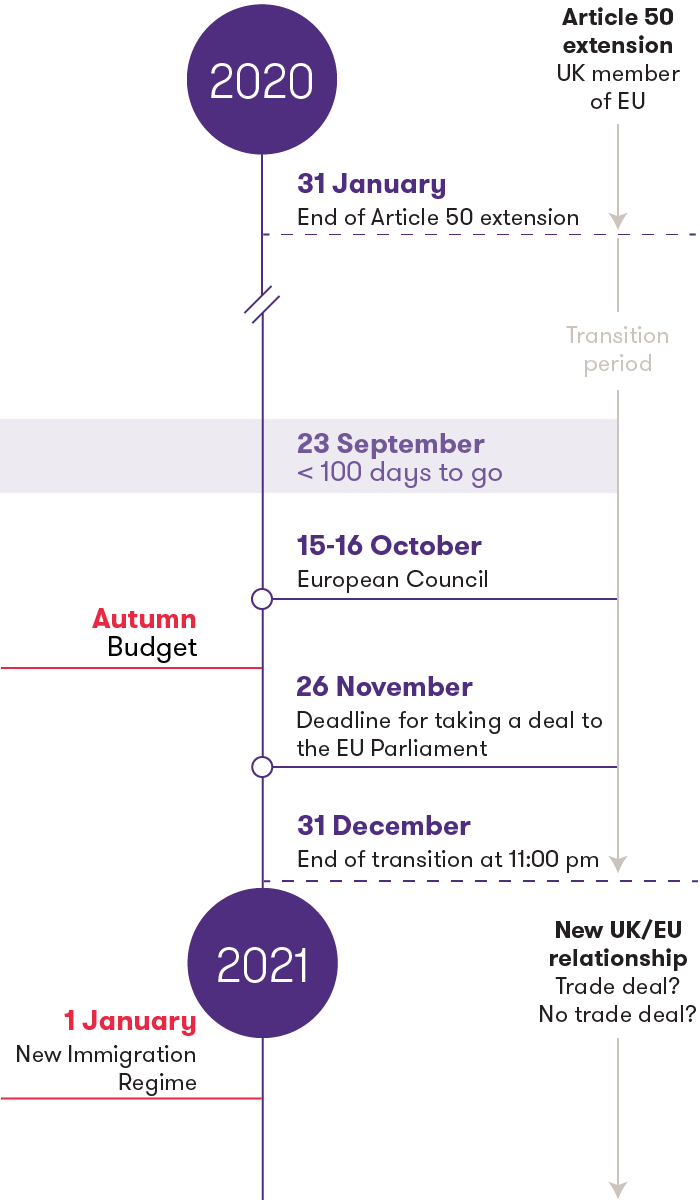 Talks are ongoing, but little apparent progress has been made.

In recent weeks, we have seen the ramping up of rhetoric from both sides in advance of the crucial European Council meeting in mid-October. The Prime Minister has identified this as the date that, if an agreement is still not forthcoming, it is time for both sides to “move-on”, leading to a No Deal Brexit.

As we have learned over the past four years, it's hard to know how much of what the government says is to pander to a domestic audience and how much is genuine policy. Those on the inside remain adamant that the UK is fully committed to getting a deal with Europe, but you could be forgiven for missing that from what you read in the papers.

While it may seem that both sides are far from reaching an agreement, this is exactly where we were 2019. Much disagreement and confrontation, then at the last minute, concessions were made and a deal reached.

Could we see the same thing now? Only time will tell.

Chances of No Deal Brexit rising, but an agreement is possible

The important difference between this deadline and previous ones is the makeup of the UK parliament.

Boris Johnson has a large majority, built on a manifesto that accepted a No Deal Brexit. This was not the case ahead with previous deadlines. The last parliament was against a No Deal Brexit and voted to prevent it, but things are different now.

Simply put, the maths has changed.

Increased provocation in recent weeks combined with a parliamentary majority for No Deal Brexit means it is a greater risk than ever before. That said, Boris Johnson has shown his willingness to be flexible to get a deal over the line.

We will find out shortly whether pragmatism outweighs purity when it come to Brexit.

Too many still don't think you can plan for a No Deal Brexit, but you can

Most businesses have done some thinking about Brexit, but many still feel unable to move their planning onto the next level.

Too often, organisations think that a deal will remove the need to make any changes. This is simply not the case. Regardless of whether a deal is reached between the UK and the EU, changes are coming.

On January 1st 2021, deal or no deal, the UK will leave the single market and customs union, and the free movement of people will end. These are all things that will potentially require businesses to take action.

Many of these steps are the same, regardless of whether a deal is struck or not. The necessary information to take planning to next level is there if you look for it.

Stockpiling for No Deal Brexit is back

Ahead of previous Brexit deadlines, many businesses sought to protect against possible border disruption by holding extra inventory. This is happening again.

Businesses have learned lessons from before and refined their approach, being more strategic in what they hold and better utilizing available space on-site, rather than renting as much additional capacity.

Organisations are planning to hold additional stock at all levels, from finished goods to spare parts. Some are even using it as an opportunity to buy stock in foreign currency ahead of any depreciation in the pound.

Stark differences between a deal versus a No Deal Brexit

With talk of a Brexit deal being a “bare bones" agreement, implying the most basic of arrangements, it is easy to think that getting one is not that important to business. What is clear from conversations with both private companies and local government, is that this could not be further from the truth.

While a free-trade agreement (FTA) may offer little to the service industry, for other sectors it is invaluable.

Sectors reliant on the movement of goods across borders, especially those with potentially high tariffs such as food and drink and automotive are desperate for an agreement to be reached. Clients in the automotive sector face tariff barriers ranging from 10-22% on finished goods alone. A deal reducing these to zero is vital to their survival.

This concern spreads to the public sector too, with local authorities aware of the economic make up of their regions and concerned about the deep impact the failure to get a deal will have.

NAVIGATING BREXIT
Need practical advice on navigating Brexit? Read our guidance
From support to self sufficiency

Taking your people with you

Given the time constraints, what are the steps you need to focus on in your preparations?

I asked some colleagues for their advice.

Everything you need to know about goods across borders >>

With time running out to obtain necessary documentation prior to 2021, here are some areas to focus on to ensure your goods get across the border smoothly.

How to manage any financial impact >>

How Brexit will affect your people >>

Understand the changes you need to make when:

Post-Transition, EU regulations will no longer apply. Whilst negotiations are ongoing and the final outcome is still unclear, indications are that there may be agreement to mirror the current EU regulations for social security. Notwithstanding this, organisations still need to consider:

How to stay compliant and cost-effective >>

If possible, bring payments of intra-group dividends, royalties and interest forward to before December 31, 2020 to benefit from European Directives. Consider domestic and treaty positions for 2021 and beyond.

Ensure transfer pricing rules are up to date

Transfer pricing policies will need updating as new operating models are set up and intra-group transactions are implemented. It is particularly important to account correctly for the intangibles used and exploited around the group post-Brexit and in any pre-Brexit planning.

There is still time for you to get ready for 2021, regardless of the outcome. For further support on Brexit, visit our Brexit hub or get in touch with Tom Rathborn.