The last two years have marked a busy period in the UK media sector. A buoyant transaction environment saw a spurt of deals, offering a fantastic result for the sellers who realised value from the growth of their businesses.

This leads to the question of what acquirers are gaining in these multi-million-pound deals. Intangible assets have an increased importance in media, where the majority of the intrinsic business value is in its brands, relationships, people and ideas.

The application of IFRS 3 business combinations aims to increase disclosure by requiring firms to communicate the mix of these intangible assets in goodwill, as well as the overall deal structure. In a world where tech and media businesses that are laden with intangible assets - such as the FAANG (Facebook, Amazon, Apple, Netflix and Google) and Microsoft - dominate the stock markets, it is now increasingly important to understand how these intangible assets contribute to overall business value and remains a critical area of focus for investors and other stakeholders.

Our latest media sector report, the third edition of our review into the M&A media landscape in the UK, benchmarks acquisitions by UK media companies quoted on the London Stock Exchange Full List and AIM, and private companies adopting IFRS over the past two years.

We identified the following key areas of investor interest in the sector:

The value of the intangible assets, including goodwill, often exceeds the purchase price in the deals we reviewed across sub sectors, namely advertising and marketing services, entertainment and publishing/data. This emphasises the fact that the majority of value in these businesses is in its people, ideas and relationships rather than physical assets. Acquired brands (including tradenames and trademarks) were considered to be the most valuable asset, proving that a name does matter in this business.

The advertising and marketing services sector was the most prolific acquirer accounting for 109 deals with an average deal value of £12.5 million. This indicates a strong appetite for unique and differentiated businesses in the sub sector. In value terms, the publishing/data sector ranked highest, spending around £2.7 billion with an average deal size of £37.3 million.

Encouragingly for the reader of accounts, most companies have attempted to identify intangibles rather than leave everything in goodwill, which is a continuing positive aspect. This is possibly a result of the development of custom and practice within the sector and continued informed challenge from auditors.

We continue to note a wide divergence between best-in-class reporters, even among companies in the same industry, showing that there is still scope for improved transparency.

For more interesting insights into what companies are actually buying in the media space, what form of consideration they are paying and why increased transparency to investors is important in the sector, download our latest publication [ 613 kb ]. 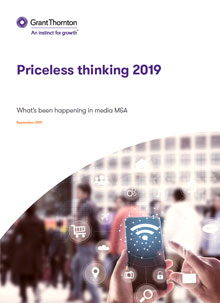