Election 2019: What does this mean for Brexit?

We have identified three core scenarios for the outcome of the 12 December 2019 election.

Here, we go through these scenarios to assess what they mean for Brexit, what this means for businesses and what businesses can do to navigate this.

This would enable Boris Johnson to pass the new Brexit withdrawal agreement and the UK could leave the EU on 31 January (possibly 31 December if they really push the legislation through).

If that process faced any hitches, or a hard Brexit group of MPs opposed the bill, it is possible the country would face a no-deal Brexit on 31 January. Unlike the current parliament, after the election there may no longer be a majority able to block a no-deal Brexit.

If the deal is ratified, the UK would enter a transition period during which the government would start to negotiate a trade a deal with the EU to agree future UK-EU economic relations. This would not include a customs union. Indications are that Boris Johnson would aim for an agreement allowing regulatory divergence. The government is also aiming for zero tariffs with the EU, but the EU will be unwilling to agree this without binding commitments to a ‘level playing field’ in terms of regulation.

The transition period is set to end on 31 December 2020. In July 2020, the UK and EU can agree to extend the transition for up to two years.  Boris Johnson has ruled out an extension. If a free trade agreement has not been reached with the EU by 31 December 2020, Great Britain would leave EU arrangements and immediately trade on World Trade Organisation (WTO) terms (essentially a ‘no-deal Brexit’ at the end of the transition period). The Northern Ireland Protocol would apply meaning special arrangements in Northern Ireland, with increased market access and reduced barriers to trade.

Summary: UK likely to leave EU by 31 January 2020 with a deal. Transition ushers in further medium-term uncertainty. A no-deal ‘end of transition’ on 31 December 2020 is a significant possibility.

Scenario 2: A Labour Government, supported by the SNP

Labour policy is to renegotiate the Brexit withdrawal agreement and seek a future relationship based on membership of a customs union with the EU, and very close alignment with the single market – in other words a ‘soft Brexit’. If they can agree this with the EU, Labour would then put this deal to a second referendum alongside the option to ‘remain’. This all depends on the EU agreeing to renegotiate the withdrawal agreement and to a further Brexit extension to enable renegotiation and a second referendum (all in, this would probably need at least six months). It is likely that the EU would agree to this, but this cannot be taken for granted.

Summary: Ongoing uncertainty; extension to summer 2020 and second referendum likely; soft Brexit in January 2021 (or later) or remain in EU at end of the process.

In this scenario there is likely to be a majority of MPs opposed to a no-deal Brexit. Avoiding no deal on 31 January would still require the EU to agree an extension, which is likely but not guaranteed, or for MPs to vote to revoke article 50 and abandon Brexit. If the Liberal Democrats agree to support a government that introduces a second referendum, then we would see a 6 month or so extension (as for Labour, above) and a second referendum, which could result in either remaining in the EU or leaving. But if there is deadlock and no government can be formed, and no agreement can be reached between any parties, then we may have a second election; and with a second election, all options are back in play.

In other words, the three main Brexit outcomes remain as they have been for the last three years: a deal, no deal or no Brexit.

What this means for business

We may see a short-term ‘deal dividend’ if a deal is agreed after the election, resulting in an uptick on deals, spending and investment. But as we progress through the one-year transition period, uncertainty about the future EU-UK economic relationship will come back into play.

Business can and should be proactive in the face of uncertainty. To protect and create value:

Regardless of Brexit, with the UN and others warning of the possibility of a global recession in 2020, these steps will help prepare business for any eventuality.

A no-deal Brexit is still on the table, so review, refine and develop your contingency plans. If there is a no-deal it will come following a year of economic limbo, which may send out some sharper economic shocks.

No-deal planning also gets your business ready for all other Brexit outcomes.  Much of the preparation needed for no-deal covers action that businesses need to take to prepare for a Brexit deal, and our future trading relationship, at the end of a transition period. We have identified the top issues businesses would face in a no-deal scenario and compared them to a 'Brexit deal' scenario. As you’ll see, most actions ensure your business is ready for any form of Brexit. 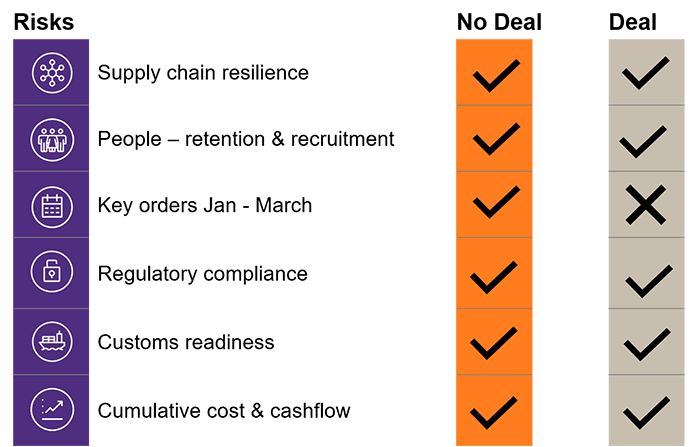 What if there is a second referendum and remain wins, or there is a Labour government and a soft Brexit? First, this will be a significant period of uncertainty before we get to an end point. Second, a soft Brexit still carries many of the issues thrown up by a no-deal or harder Brexit.

Third, a soft Brexit or no-Brexit outcome would most likely come about through some form of Labour government, which may seek to pursue wider policies at the same time. The party's wider economic policies may have significant impact on employment costs, tax and business models. So, reviewing your business model for Brexit will help inform and assess the implications of radical changes to public service markets, ownership, regulation, employment and taxation.