Adult social care remains one of the largest areas of expenditure for local authorities across England, accounting for an average of 40% of a local authority’s overall budget.

This puts a large amount of pressure on local authorities when managing their budgets, balancing the needs of residents with the costs of services.

With demand on services only expected to increase, councils need to embrace more innovative solutions to mitigate the financial risk this issue presents.

To better understand the financial implications and identify potential savings that could be made, we looked at the impact of long-term care costs versus short-term care costs.

Our research found that adult social care has experienced a large decrease in short-term spend since 2015, while long-term spend has risen steadily.

Representing care that lasts beyond six months, long-term care is a significant driver of costs within the social care sector. Following a placement in a nursing or residential home, for example, it is unlikely that an elderly individual will step-down into a less intensive care environment or return to their own home. Instead they will remain in this setting for the duration of their life, at cost to both the individual and the council.

Reducing the demand for and cost of long-term care placements is a huge factor for councils seeking to ease their financial risk. By deploying short-term care options earlier in the process, enabling patients to regain or maintain independence following treatment, councils could reduce the costs associated with ongoing care.

However, our analysis shows that since 2015 there has been an average 5.5% increase in long-term adult social care spend across the nation. In contrast, over the same time period, we have seen a 7.7% reduction in spend on short-term services.

Interestingly, this is the case despite previous research showing an overall reduction of 59% in adult social care unit cost expenditure in the majority of regions since 2011/12.

This is reflective of a social care environment at the brink of collapse. Council’s are facing an unprecedented demand for services and are being forced to drive down unit costs in order to afford to provide their statutory duties. This places unsustainable pressure on the provider market to deliver care at this low cost, and significantly impacts on the ability to maintain quality care standard

Spend across the regions 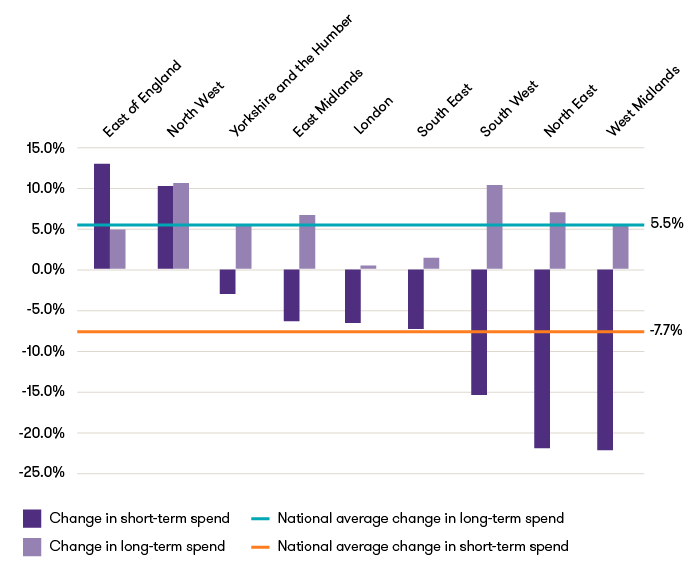 Our analysis shows that between 2015 and 2018, all regions experienced an increase in their long-term spend.

London saw the lowest increase in spend compared to all other regions. In fact, of the eight local authorities with the lowest proportional spend on long-term services in 2017/18, six were London boroughs.

London has also experienced the greatest decrease in unit cost expenditure per head on adult social care between 2011/12 and 2017/18, with a reduction from £378 to £346 per head.

This could be the result of increased cooperation between London boroughs in their approach to the provider market. Rather than be in competition with each other, London boroughs are entering into arrangements with each other and working with providers to agree ‘market rates’ for services across multiple boroughs. This puts an end to the disparity in cost between boroughs and, through collective bargaining, allows a defined cost of social care to be developed.

Only two regions – East of England (+12.8%) and the North West (+10%) – have seen an increase in short-term spend between 2015 and 2018. In contrast, three out of the eight regions that have experienced a considerable reduction in short-term spending twice doubled (-15.5%, South West) and tripled (-22% in the North East and West Midlands) the national average of - 7.7%.

As councils across England look to reduce their spend on both long-term services and adult social care as a whole, it is worth considering the benefits of increasing the proportion of budgets spent on short-term services. Efficient deployment of short-term care can support patients to regain their independence and prevent them needing further services. With the average proportion of short-term expenditure sitting at just 3.8% in 2017/18, this presents is a real opportunity for councils to redress the balance and improve both patient wellbeing and their financial health.

For more information, get in touch with Matt Custance.