What are the latest trends in merger control and merger decisions by the CMA? Katy Mattingley reviews the current regulatory landscape for those embarking on M&A.

In the regulatory landscape for M&A deals, merger control plays an important role. But the process can be lengthy and costly so having experienced advisers can ensure a smooth process.

Following our insight issued in 2018 – Recent trends in merger decisions – we continue to report on an annual basis on the five-year trend in merger cases filed with the Competition and Markets Authority (CMA). We've summarised some of the key merger trends in 2019 below: 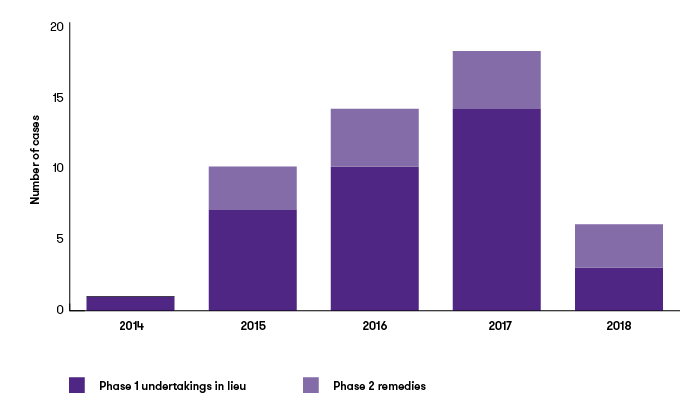 Reduction in percentage of voluntary notifications

In the UK, unlike most other jurisdictions, merger notification is voluntary. Parties can complete mergers without notification, but the CMA can open an investigation following completion if it considers there may be competition concerns.

Continued high use of IEO but large percentage revoked

Once the CMA opens an investigation into a completed merger, it can then issue an Initial Enforcement Order (IEO). This interim measure is to ensure that no further action is taken to merge the two businesses pending the determination of the merger investigation. The CMA can also issue an IEO on anticipated mergers (those mergers that are notified to the CMA) if it considers that the two businesses have ceased to become distinct.

IEOs had been increasingly issued in completed mergers to 100% in 2017, and this has continued in 2018 – suggesting that an IEO is automatically applied in completed mergers. This is in line with the consultation document on interim measures issued by the CMA on 1 May 2019. We note, however, that in 2018 46% of those IEOs were revoked.

Emergence of fines for breaches of interim measures

The use of an IEO or an Interim Order (IO) during Phase 2 are collectively known as interim measures. In the event that the CMA finds that the merging parties have breached interim measures, the CMA has the power to impose fines of up to five percent of worldwide turnover.

At the end of 2018, and into 2019, the CMA has issued a number of fines for the breach of interim measures. This emphasises how critical it is to ensure parties fully understand the hold-separate requirements of the IEO, and are transparent with the CMA on the level of integration at the time of the IEO/IO and ongoing interaction. All three of the Phase 2 remedy cases in 2018 incurred fines for the breach of interim measures.

Increase in use of monitoring trustees

The CMA can require the appointment of a monitoring trustee pursuant to the IEO or IO at Phase 1 in order to ensure the parties are adhering to the hold-separate commitments set out in the interim measures.

In the period to 31 December 2017 directions to appoint a monitoring trustee pursuant to an IEO were only given in six of the 76 IEOs applied to completed mergers: four at Phase 1 and two at Phase 2 to 2017, with a further appointment made in 2017 in respect of an IO following an IEO. One of the cases was cleared at Phase 1.

In 2018 there were 24 IEOs (11 of which have been revoked) of which three have led to monitoring trustee appointments at Phase 1 and a further appointment made pursuant to an IO which followed an IEO. In respect of one of those appointments, the case was cleared at Phase 1.

We have acted as monitoring trustee in more than 20 cases reporting to the CMA (or its predecessors, the UK Competition Commission and Office of Fair Trading). We have also advised on governance and controls to ensure adherence to interim measures during Phase 1 and Phase 2 investigations. As seen above, getting this wrong can be costly.

If you would like to find out more about our monitoring trustee services, please contact Craig Reed.