Are gender quotas good for business?

While the desire for greater gender diversity in UK boardrooms is now widely agreed on, the best way to achieve it is not. In his 2011 review, Lord Davies stopped short of introducing mandatory quotas for women on boards in the UK. Instead, a voluntary, business-led approach was favoured to increase the number of women in leadership roles.

But although progress has been made in appointing more women in business to board positions – the Female FTSE Board Report 2019, published by the Cranfield School of Management, revealed women now make up 32% of FTSE 100 directors – many are lagging behind. Some businesses have even been accused of adopting a token ‘one and done’ approach to women on the board, or looking at it as a tick-box exercise. Could setting mandatory quotas address some of the issues?

When it comes to compulsory quotas, business opinion has been generally resistant. But if voluntary targets aren’t delivering better results, can quotas offer an ethical alternative path to diversity?

CJ Bedford, an associate director in our people advisory team, says that setting quotas and penalising companies for failing to comply with them is not the way to enhance business diversity.

“There is a huge difference between a quota and a benchmark,” she says. “Quotas drive a particular set of behaviours and, inherently, there has to be some kind of positive discrimination in order to enable the change required. Benchmarks, or indicators of what ‘good’ looks like, can certainly help organisations to make progress in this area without the pressure to either over-recruit or over-promote people who aren’t in the talent market yet."

Bedford says this comes down to fundamental motivation techniques. “It’s the age-old difference between using the carrot or the stick to motivate people. We also have to be clear on the case for any change – intellectually, commercially and emotionally.”

Targets are not incentive enough

This aversion to quotas is understandable but the softer incentive of setting targets also sparks nervousness among organisations for fear of not hitting them and attracting criticism.

Voluntary targets do offer a clear way to focus the commitment and resources of an organisation, however. As Yvonne Smyth, Group Head of Diversity and Inclusion at Hays, explains: “Quotas are more problematic and represent risks of claims of tokenism and positive discrimination, especially without the proper support.”

Could quotas work in some sectors?

It could be argued that quotas would work in industry sectors that are naturally more dominated by one gender, and therefore find it more difficult to hit targets than others. But Ann Cairns, Vice Chairman of Mastercard and co-chair of the 30% Club, which campaigns for greater representation of women on boards, disagrees.

“I find it difficult to think of an industry in which women couldn’t play a part,” she insists. “I have an engineering background; I grew up in the north of England and was the first woman ever to go on offshore gas rigs in North Sea. Even in heavy engineering industries like mining, I fail to see that there aren’t women who are both interested and capable of sitting on boards.”

“The 30% Club doesn’t believe in quotas because we think it’s all about cultural change,” says Cairns, although she acknowledges that quotas can achieve quick results.

There is a widely held view that pursuing a numbers-based diversity strategy goes against the spirit of creating a truly diverse workplace – and can quickly raise serious concerns.

Philippa Foster Back, Director at the Institute of Business Ethics, says: “In setting out to achieve the numbers you may not get the right people for the board, which is vital and takes time. The real issue we now face is to make sure the pipeline of future and refresher candidates is there. This has become the key challenge for CEOs in terms of diversity.”

Perhaps the biggest ethical concern around setting quotas, from the candidate’s point of view, is that of being recruited by mandate. “From an individual perspective, these practices might lead to assumptions that individuals are benefitting from favourable treatment based on their characteristics instead of their merits,” adds Foster Back. “This perception is problematic for both the individual and their colleagues.”

Cairns agrees: “I’ve spoken to many women who say they would hate to think they were recruited because there was a mandate out there. There are so many talented women that I find it unbelievable for companies to say they struggle to find them. Provided the company is willing and has the right pathway, they will find great board candidates.”

Gender quotas work in Norway, why not here?

There is no doubt that setting quotas can deliver quick results. Norway introduced its quota law in 2007, requiring boards of listed companies to have a gender balance of at least 40/60. The result was an increase in female board members from 6% in 2002 to 42% in 2016. In the quota-less UK, progress has been much slower.

“Our latest FTSE 100 report shows the UK is currently at 32.1%. When I started reporting this 21 years ago it was 6.7%,” says Susan Vinnicombe, Professor of Women and Leadership at Cranfield School of Management. “However, there is a significant variance behind that average of 32%, with some companies at 50% and some as low as 16%. You don’t get that in countries with quotas.

“While this is not a major issue for the UK right now, the UK may seriously have to reconsider having quotas as a way of ‘unsticking’ intransigent companies that haven’t made progress.” 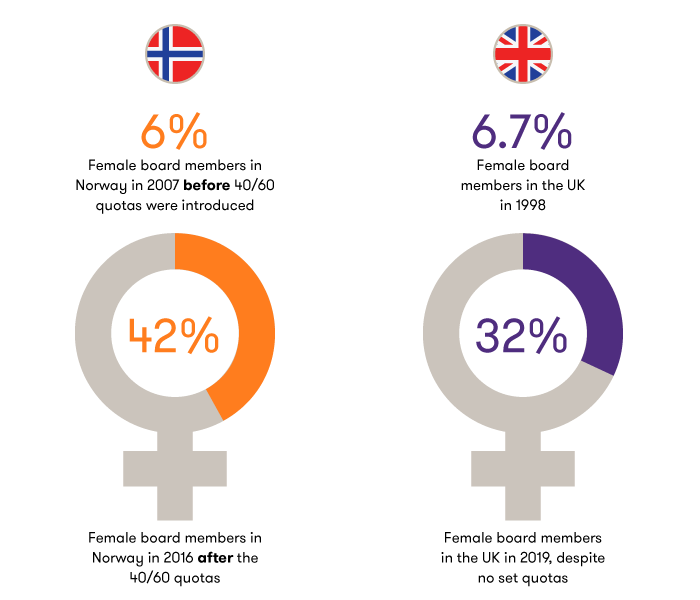 Improving gender diversity – questions for the board

Changing a company culture and nurturing female talent in the pipeline takes time. Companies need to take a holistic look at what the drivers are behind their lack of female representation:

Expectations are changing with each generation. Younger employees have been brought up expecting diversity and inclusion when they join the workforce. Meanwhile, young entrepreneurs are building start-ups that are more diverse than they ever have been. The cultural shift filtering down from the larger companies will be met by that arising from new start-ups and scale-ups. It will take time, but I'm confident we'll get there.

Women in business: Putting the blueprint into action

Find out how we're working towards everyday inclusion