A new report, India meets Britain Tracker 2017: The latest trends on Indian investment in the UK, published by Grant Thornton UK LLP in association with the Confederation of Indian Industry (CII), reveals that Indian companies are continuing to make an important contribution to the UK economy.

The report, which monitors Indian businesses operating in the UK with an annual revenue growth of 10% or more, shows that the 55 fastest growing companies achieved an average annual growth rate of 31%.

Of the 55 that made the list, 23 are new entrants while 32 featured in last year's list. Just under half of the companies included in this year's tracker recorded a 25% growth rate or above. Datamatics Infotech Limited topped this year's list with a growth rate of 103%.

Companies from the technology and telecoms, and pharmaceuticals and chemicals sectors have always featured strongly in the India Tracker and this year make up 31% and 24% of the list respectively. These are both sectors where businesses are continuing to find growth opportunities by diversifying into new spheres of activity. The business services sector entered the top three for the first time with 11%, up from 6% in 2016 and just 3% in 2015.

London continues to strengthen its dominance as the leading destination for Indian investment in the UK. Of the fastest-growing Indian companies, 44% are now based in the capital, up from 39% last year and 25% in 2015.

The analysis also found that in 2016 approximately 800 Indian companies were operating in the UK and recorded combined revenues of £47.5 billion, showing that the deep economic relationship between India and the UK continues to flourish.

According to the report, these companies employ almost 110,000 employees in the UK, and last year had a combined capital expenditure of £4.25 billion. These investments are diverse, ranging from fixed assets to other type of investments on top of their initial investment in the UK, illustrating their continued long term commitment to the UK economy.

The UK has long been the preferred European destination for foreign direct investment (FDI) from India. Out of the 845 FDI projects made by Indian companies in 16 European countries since 2003, over 45% have been in the UK1. London ranks as the top destination city recording 132 projects.

“With around 800 Indian companies now operating in the UK, it is clear the UK remains a highly attractive destination for Indian investors. The Modi government’s pro-business agenda is creating the right environment for Indian businesses to pursue and realise growth at home and overseas. With continued political stability and leadership on its reform programme, India is poised for significant economic growth and prosperity.

"Whilst it is still too early to predict what impact Brexit will have on the UK’s attractiveness as an investment destination for Indian companies, the many advantages the UK can offer are not set to disappear. The UK government is also clearly keen to strengthen the UK’s ties with India and since the Brexit vote, a number of UK political representatives, including the Prime Minister, have made various visits to India with the hope that Brexit will open up a new free trade deal between the two countries.

"This year’s Tracker shows a continuing expansion of Indian companies’ footprint in the UK. Yet the UK must not take the presence of Indian companies for granted. In the years ahead, as the Indian economy develops to become one of the largest and most powerful in the world, the opportunities to boost investment into the UK will grow.

"To realise these opportunities the UK must ensure that, as it attends to its relationship with the wider world post Brexit, it protects and promotes the factors that make it such an attractive destination for Indian investment. The UK and India have much to offer each other and both countries should commit to re-forging their historic relationship for a prosperous future."

“The report shows that Indian companies continue to strengthen their economic impact in the UK. While IT and telecom sector retains the largest composition, we are seeing greater influence of pharmaceuticals, business services, financial services, engineering and energy sectors.

"The report identifies £4.25 billion of new investment last year by the Indian companies, and further jobs being created as part of their continued investment programmes. Given that the report only tracks companies set up as subsidiaries, not branches, we believe the employment numbers are even higher than 110,000.” 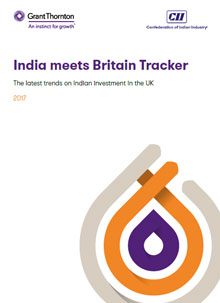