According to the latest research from leading business and financial adviser Grant Thornton UK LLP, overseas investors' appetite for UK food and beverage companies has continued to increase, with 2016 recording the highest level of activity for three years.

Grant Thornton's latest Bitesize report found that the number of deals involving overseas investors increased to a third (32%) of all transactions in 2016; representing a continued rise from the levels seen in 2014 (20%) and 2015 (28%).

Asian investors' appetite in western assets remained a key trend in 2016. They accounted for 19% of all overseas buyers last year, up from 11% in 2014 and 13% in 2015. There was particular interest from Japanese investors, with the largest transaction of Q4 2016 being Japanese company Sumitomo's approach to acquire Irish fruit distributor Fyffes.

The number of transactions involving private equity buyers also edged ahead of the volume in 2015, with 12 deals in the fourth quarter of 2016, making a total of 38 for the year. This compared to 35 transactions recorded in both 2014 and 2015.

The analysis found that, overall, deal activity in the food and beverage sector in 2016 has remained strong. Q4 2016 saw 48 transactions completed, bringing the total for the year to 198. Whilst this is a moderate decline in volume compared to 2015, 2016 was still the second busiest year for M&A activity in the sector since 2007.

Trefor Griffith, Head of food and beverage at Grant Thornton UK LLP commented on the findings: "2016 has been a solid year for M&A activity in the food and beverage sector. Despite seeing a fall in both the number and the total disclosed value of deals compared to last year, 2016 is still the second busiest year in terms of activity that we have seen since 2007. Given the level of uncertainty in the market this year amidst the EU referendum, which appears to have prompted the slight dip in transactions in the second quarter, this strong result once again displays the robust nature of the sector.

"We have continued to see interest from overseas investors in UK food and beverage businesses this year. This has been a recurring theme in recent years and, given the depreciation of sterling following the result of the EU referendum vote, is likely to continue, with UK assets now around 20% cheaper for overseas buyers.

"The fall in the value of sterling also presents opportunities for UK food and drink manufacturers, for those looking to grow through exporting and also for those with a more domestic focus. The weaker pound has resulted in the price of UK goods becoming more competitive and attractive to overseas buyers, whilst also making importing alternatives more expensive. So, along with an expected increase in exports, 2017 could see an increase in import substitution. A positive for those focused on the UK market, as increased import prices turn the sector towards locally produced products.

"Unsurprisingly we have seen the UK's decision to leave the European Union be a dominant feature of 2016. With the shape of negotiations still unclear and the prospect of a 'hard Brexit' increasing, the only real certainty is more uncertainty. But the impact on deal activity is difficult to determine at this early stage. The sector has performed strongly throughout the last year despite this on-going uncertainty and, as we have seen increased levels of investment from both overseas and private equity buyers, it is clear that interest in the food and beverage sector remains."

*This total excludes AB InBev's £81 billion acquisition of SABMiller at the end of 2015. 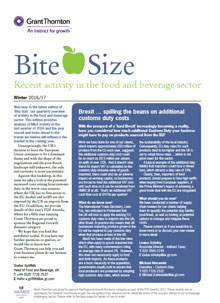