New research from leading business and financial adviser Grant Thornton UK LLP has found that there is a huge imbalance in the liquidity of the UK economy and that, despite a 14% increase in cash on hand since 2010, the majority of this is held by a small number of companies.

The study, The UK's cash conundrum [ 590 kb ], found that although cash reserves are up by 5% from last year, and 14% from five years ago, the balance is not evenly distributed to optimise growth across the UK economy.

Just 10 companies hold 30% of the £244bn - the equivalent to 13.5% of the UK GDP in 2015 - currently sitting on corporate balance sheets. If this cash was effectively re-distributed it could help support the growth aspirations of dynamic organisations and have a substantial impact on UK economic growth.

Despite the significant increase in working capital seen over the past five years, the study also found that a further £135bn of excess cash could be released if companies continue to improve their working capital management.

Those companies that have focused on embedding effective working capital practices and unlocked cash sustainably, were found to outperform their peers. Only 10% of the companies studied achieved improvements in their working capital for three consecutive years. These companies delivered a revenue growth of 3% and showed an 11% improvement in their EBIT margin, versus a 1% growth and a -2% drop respectively for the remaining 90%.

Company size has also been found to affect working capital performance, with mid-sized companies feeling the strain. Mid-sized businesses showed a 3% year-on-year deterioration in their cash to cash cycle, compared to a 2% and 14% improvement for small and large companies respectively.

Mark O'Sullivan, partner and head of working capital advisory at Grant Thornton UK LLP, commented: "Our research has shown that the UK is in a cash conundrum. The great liquidity imbalance threatens to starve dynamic, fast growth companies of the working capital needed to accelerate the UK economy. With significant levels of excess cash tied up on UK balance sheets the onus is on companies to focus on optimising their own working capital performance. There is no easy fix to this problem but through effectively and efficiently releasing this cash, we believe we could see a significant impact on UK economic growth.

"A critical element to creating a vibrant economy in which people and business can flourish, is the UK economy's ability to deliver liquidity to those companies best placed to create economic growth. The performance of mid-sized businesses plays an intrinsic part in UK economic prosperity and the significance of their continued drop in this area should not be overlooked. If we are to continue to unlock sustainable growth in these dynamic organisations then we need to focus on improving the working capital performance across this group.

"We have seen a stark contrast in the success of those companies that have focused on embedding effective working capital practices and those that haven't. Their efforts have proven fruitful and have delivered in areas beyond cash flow. This suggests that if more companies followed their example, and unlocked greater cash flow, we would see increased levels of profitability, and further reinvestment to help drive improved rates of growth across the economy." 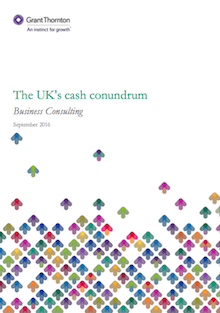