According to the latest research conducted by business and financial advisory firm Grant Thornton UK LLP, overall disclosed deal value for 2015 in the food and beverage sector reached the highest total for five years.

The total disclosed deal value for 2015 was £81.9 billion, compared to £8.6 billion in 2014, a huge increase largely due to the £71 billion mega deal acquisition of SABMiller by AB InBev. Excluding this transaction, overall deal value for the year reached £10.7 billion, a 24% increase on 2014 and the highest annual deal volume recorded since 2010 (spiked by £12 billion sale of Cadbury) and 2007 before this.

Deal volumes also increased with 213 transactions completed, compared with 167 in 2014.

Internationalisation once again proved a common theme with inward investment involving an overseas party growing to 41 transactions, compared with 21 in 2014. Transactions involving Asian investors increased by 50% on 2014 to a total of six deals.  The number of acquisitions by UK/ Irish companies also surged to 56 transactions, a 124% increase from 25 in 2014.

Trefor Griffith, Head of Food and Beverage at Grant Thornton UK LLP, commented: "Companies’ desire to expand their global presence was a significant catalyst for M&A activity in 2015. The UK is an attractive market for overseas investors and the interest in European consumer businesses from Asian groups is growing, allowing them to expand their global footprint and also introduce western brands into their domestic markets."

Griffith concluded: "Diversification from traditional product lines into faster growing ‘healthier’ alternatives makes sense for companies seeking to combat static or even declining sales growth. However as the 'war on sugar' rages on and focus shifts to specific types of sugar, with even fresh fruit coming under some scrutiny, it is vital to ensure that a product and brand has longevity.

"With a number of on-going investment themes underpinning transaction activity there is no reason to expect a drop off in M&A activity and we are optimistic that 2016 will be another strong year for the food and beverage sector. Large corporations are sitting on significant amounts of cash, private equity groups have plenty of unspent capital and alternative debt providers are proliferating. We look forward to helping our clients achieve their strategic objectives in the coming year.” 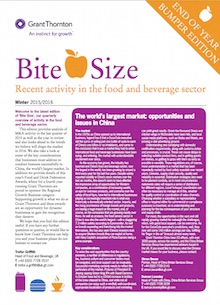