A review by leading business and financial adviser Grant Thornton UK LLP shows that appetite for M&A activity in the bars, restaurants and casual dining sector in 2015 was particularly strong. The report attributes this to improved consumer spending, which heightened already strong interest from investors.

Despite 2015 mirroring the amount of deal activity seen in 2014, the total level of investment fell in the sector. The acquisitions of Pizza Express and the Spirit Pub Company in 2014 greatly distorted the total value. Discounting these two mega deals, the average disclosed deal value was £60.4 million, compared to £37.1 million in 2015.

PE investment was particularly prominent in 2015. 26 deals were completed, compared to 21 in 2014 (an increase of 24%), in part boosted by improved consumer spending driving robust trading in the sector. While there were a significant number of private equity exits (such as Quilvest from YO! Sushi, and CBPE from Côte), the buyers on the other side of the table were other PE groups keen to support businesses in their next phase of growth (Mayfair Equity and BC Partners respectively). The tertiary management buy-out of YO! Sushi is just one example of the continued popularity of pan-Asian restaurants both with consumers and investors.

Whilst there were more net restaurant openings in London in 2015 (123) than in 2014 (101), according to Harden's London Restaurant guide, an environment of rising costs, growing competition and intense over-supply are making the capital a challenging place to operate. The restaurant and bar trade outside of London is, however, thriving with operators such as LEON, Le Pain Quotidien and Busaba Eathai, now opening sites outside of their former London heartland.

"2015 proved a strong year for M&A activity with significant interest from the private equity sector. 2016 has seen a robust start, and although it has not matched the explosive growth seen in early 2015, there was a healthy level of appetite displayed in the first quarter, particularly from casual dining brands operating outside London. All eyes are on potential deals for New World Trading Company as well as Tesco’s potential sale of its Giraffe restaurant chain.

"The huge growth in the number of openings in 2015 has created an environment of over-supply and intense competition, particularly as consumers are becoming increasingly more discerning. Rising living costs in London are also starting to drive commuters out of the city, leading to an increased interest from brands in out of London trading. A booming restaurant and bar trade is visible outside London with Birmingham, Leeds, Bristol, Manchester and Glasgow leading the way."

To read the full Come dine with us report please click here. 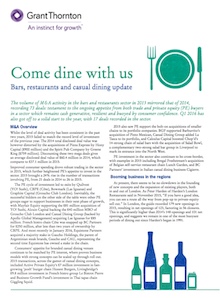