A new report from Grant Thornton UK LLP, Transmitting trust through good governance, highlights the need for charities to address concerns around transparency and governance to tackle the loss of trust in the sector following the demise of Kids’ Company, the case of Olive Cooke and the Etherington Review. Grant Thornton’s report is based on a review of the latest financial statements of the top 100 charities (by income) in England and Wales, as filed with the Charity Commission in summer 2015.

In its fourth review of governance in the charitable sector, Grant Thornton examined the disclosures made in the trustees’ reports of the top 100 charities in England, Wales and Scotland. The review found that the most commonly cited risk was related to loss or availability of key contracts/funding streams. This was disclosed by 50% of the top 100 charities (2015: 47%). This figure has increased by more than a fifth in the last two years and is five times the figure reported in 2013.

While the number of charities reporting the risks associated with the state of the economy has fallen gradually over recent years (2013: 58%; 2014: 43%; 2015: 34%; 2016: 14%), new risks have emerged in the sector following additional media and regulatory scrutiny. Over a quarter (27%) of charities reported the retention of staff was a key concern, up from 13% in 2015. This might reflect an improved labour market and challenges in recruiting talent from outside the sector.

Rebuilding trust in the sector through good governance

The report found that some charities are making efforts to report on those areas identified as potential weaknesses for the self-regulating sector. However, they still have some way to go, particularly around the recruitment and skills of trustee boards. These areas include:

The diversity of boards is still a concern for many. It is generally accepted that a diverse board can help ensure that a charity has an appropriate range of skills and experience at its disposal, and can provide a link to the charity's beneficiary group. Most charities (63%) disclose the existence of a diversity policy, with 30% of the top 100 including a good or detailed diversity policy, an increase on the previous year (2015: 20%).

The report found that within the top 100 charities, where it is possible to determine from the disclosure of names, 33% of trustees are women (2015: 28%). Only two boards have no female members, and women represent at least half the board on 15 boards (an increase from nine in 2015).

As the demand for transparency about funding, trustee involvement, and the tactics they employ to raise funds, increases, charities are looking for new ways to demonstrate the impact they have. Some charities are moving away from simply reporting on their outputs and outcomes, and are instead adopting impact reporting as a way to measure their performance. The report found that 16% of organisations published a separate impact report in the last 12 months.

Impact reporting requires more complex monitoring frameworks, or an academic evidence base, as well as needing boards to take a much longer-term view. However, charities are using it not only to ensure they can fend off any reputational risks by demonstrating more clearly what they can do, but to keep them focused on what their purpose as a charity is, and also to engage employees by sharing with them how their contributions make a difference. There continues to be a significant amount of debate and challenge about how to measure and report on impact, with some innovative thinking emerging.

Commenting on the findings of the report, Carol Rudge, Partner and Head of Not for Profit at Grant Thornton UK LLP, said:

“Charities are facing a loss of trust, worsened by the recent headlines around Olive Cooke and the demise of Kids Company. This could have a significant impact on charities’ abilities to raise funds, and our report found this was the most commonly cited risk.

“Against this backdrop, demonstrating transparency is crucial for those charities looking to rebuild trust with donors, employees, the public and wider stakeholders. Our report found some encouraging signs of charities trying to communicate more transparently through their annual reports. However, there is always more progress that can be made.

“With conversations and consultations turning to whether the sector should move to an opt-in model for fundraising, charities must be transparent and clear on their governance measures. Charities have already identified loss of funds and contracts as their key risk, and some commentators have indicated that if opt-in fundraising becomes mandatory, the attrition rate from regular donors could rise to 70%. If charities can’t provide robust and reliable information on those areas scrutinised by the media, public and regulators, they could find it difficult to keep funding and contracts. Charities must demonstrate that they are in control and focussed on getting the best value from external funds.

“We know that many charities are doing fantastic work, and many communities around the UK rely upon them. However, for the sector to flourish and rebuild trust, charities need to ensure they have the right governance measures in place in the first place, and then consider how they can best communicate these to their stakeholders in their annual reports and beyond. Without good governance, the hard work of charities, their staff and volunteers could be lost.”

A full copy of the report is available here: Charity Governance Review 2016 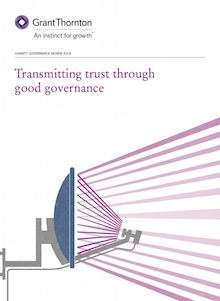