New analysis from leading business and financial adviser Grant Thornton UK LLP has identified an improvement in the quality of explanations from FTSE 350 companies, whilst at the same time seeing a potential plateau in the number of companies which are fully compliant with the UK Corporate Governance Code. The 14th Annual Corporate Governance Review, undertaken by the firm's Governance Institute, finds that 57% of FTSE 350 companies were fully compliant with the Codes in their latest set of published accounts. Of those companies which did not fully comply, 90% complied with all but one or two of the Code provisions.

The most common cause for non-compliance amongst the FTSE 350 related to the balance of independent representation on boards, where the Code requires half the board (excl. the Chairman) to be independent non-executive directors – an area where nearly 13% of FTSE 350 companies fell short.

The analysis shows a significant rise in the number of companies providing good explanations for non-compliance up to 70% (an almost 20% improvement on last year's figure)..

The Review also finds a marked lack of focus on culture. Only 13% of FTSE 350 Chairmen personally discuss culture in their primary statements – albeit a rise from previous years (2013: only 5% did so). Similarly, just over half (54%) of companies make only a passing mention of culture and values, despite the growing attention this area is receiving from the regulators.

Simon Lowe, Partner and Chairman of the Grant Thornton Governance Institute, commented: "In its broadest sense, governance serves as a vital tool in providing the assurance which instils trust and integrity in the UK's financial markets. Although we may be seeing levels of full compliance plateauing, it is encouraging to see that an increasing amount of effort has been given to providing quality informative explanations. However the same could not be said for the substantial number of companies (24%) who in reporting on their key risks, have provided verbatim statements to the previous year."

Lowe continued: "2015 was a relatively quieter year in terms of regulatory changes, with the Financial Reporting Council (FRC) tweaking around the edges rather than making full-scale changes to the UK Corporate Governance Code, as was the case in the previous year. To a large degree, the market is still digesting those developments and more companies are making robust explanations and disclosures, rather than seeking to fully comply with the Code." 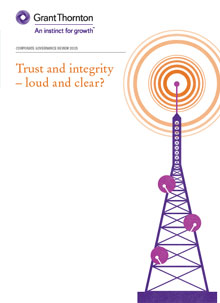