Our brand new India Tracker highlights the scale, business activities, locations and performance of Indian-owned companies making the biggest impact in the UK.

Indian-owned companies are making a big impact in the UK but where are they based, what business are they in and what is the outlook for further India-UK investment in 2014? We’ve rounded up the key statistics on our infographic; alternatively, scroll down to get the full story. 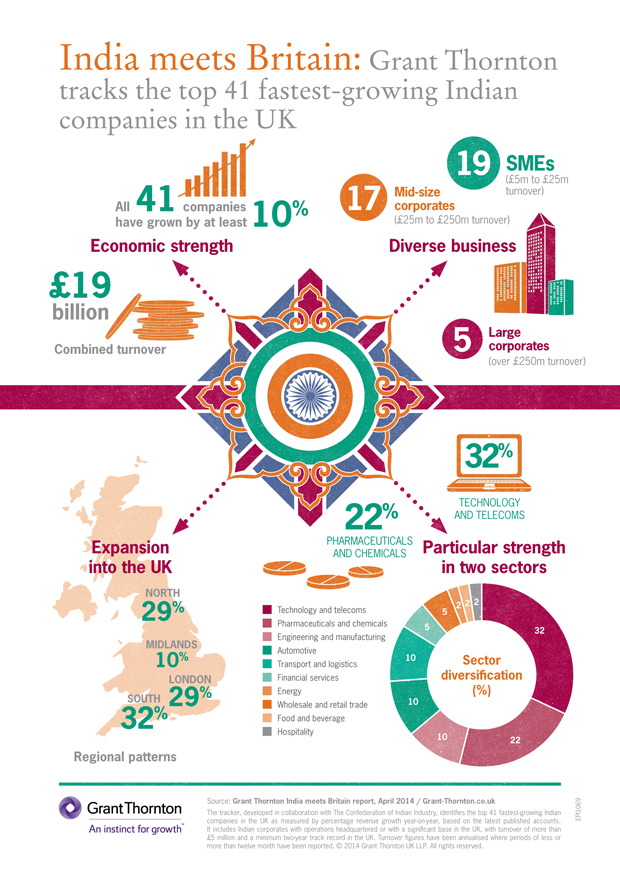 Indian companies follow a relatively well-trodden path to the UK that dates back more than 100 years when Tata first established a UK presence. According to our research:

Our research suggests that the appetite and opportunities for successful UK investment by Indian companies remain strong and may be picking up from the post-2008 slowdown, despite economic difficulties both in the UK and in India. According to a recent report by UK Trade & Investment (UKTI), India is the fifth largest investor in the UK.

Indian investors are attracted to the UK to gain access to leading-edge technology, know-how and research; for direct access to the UK market; and as a springboard into Europe.

Others have been attracted by the ability to acquire iconic UK brands, such as Typhoo, Jaguar Land Rover or fashion retailer East.

Half of the fastest-growing companies in our India Tracker Top 41 are in the pharmaceuticals and chemicals (22%) and technology and telecoms (32%) sectors. These sectors have remained strong for Indian enterprises attracted to UK know-how, technology and market positioning.

Engineering and manufacturing account for 13% of the Top 41 while automotive features 10% of the India Tracker companies – unsurprisingly this is dominated by Tata Motors.

Manufacturing companies, particularly food manufacturers such as Britannia Brands, also feature strongly. Many such businesses, have been actively accessing technology and brands in this sector, and successfully exporting this to the Indian market, as in the case of India Hospitality Corporation’s acquisition of Adelie Foods in 2012.

Indian companies are based throughout UK

The fastest-growing Indian companies in the UK are fairly evenly spread throughout the country, with just 29% of the Top 41 based in the capital. The North of England has 29% of the total, the South 32%, and, interestingly, just 10% are based in the Midlands, which is traditionally the heart of UK manufacturing.

While there were more encouraging signs for the Indian economy in the last quarter of 2013, India’s growth rate remained below 5% throughout the year. Consistent quarter-on-quarter growth and a strong economic recovery are far from guaranteed and investors remain cautious in the face of continued uncertainty. In addition, the weaker rupee may be curtailing the Indian appetite for overseas acquisition.

India now awaits the May 2014 elections, set to play a pivotal role in its economic future. The prospect of a more pro-business BJP government has spurred the markets but there are concerns that progress may be hampered if they are forced into a coalition.

Despite these issues, there is a great deal of pent-up demand among Indian businesses looking to set up in the UK. With many Indian companies having significant cash stockpiles on their balance sheets, we might expect to see some of this potential unleashed as companies seek to replicate the success of our Tracker Top 41 in the UK as and when the economy improves.

Grant Thornton is widely recognised as one of the leading international firms advising on India-related matters via our South Asia Group and has been involved in every IPO involving an Indian company on AIM, with the exception of the real estate sector.

For more information on our India Tracker and to read the full report, it is available for download here: India meets Britain: Tracking the UK’s top Indian companies [ 1068 kb ] (PDF).