The importance of long-term financial sustainability

Local government leaders have withstood ten years of austerity-driven funding reductions at the same time as managing the increasing and more complex demands on services such as adult social care and homelessness.

The Autumn Spending Round provided an unexpected increase to local government funding, but councils still have no certainty on their funding position after 2020/21. The financial sustainability of local government over the medium term remains a significant challenge. Our latest forecast* indicates that over 50% of unitary, county, metropolitan and London borough councils will be at risk over the next five years. 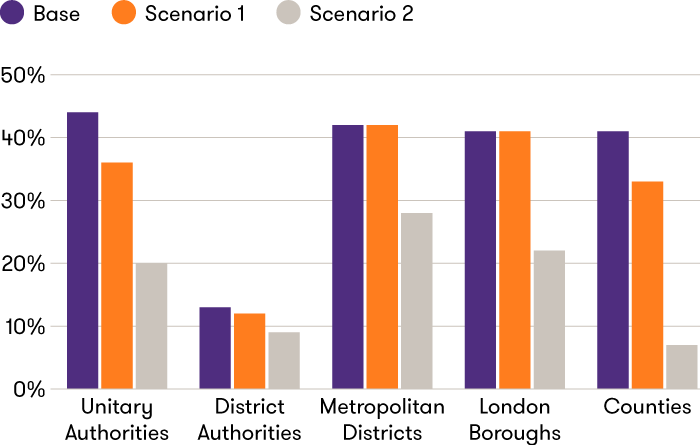 How to read the chart:

We brought together senior finance officers from councils in the north west at a roundtable we hosted with CIPFA to discuss these challenges..

Here's what they had to say:

However, the key challenge was seen as the intractability of on-going rising demand for some services, particularly adults and children’s, alongside the increasing complexity of need and the price of specialist care.

Adult social care is recognised as having benefitted from recent government funding increases, but the underlying demand pressures remain. However, it is children’s services which is creating the biggest in-year financial pressures, in areas such as out of borough placements and increasing SEN demand.

Drivers of this increase in demand and costs identified included family court judges becoming more risk averse, an increase in family breakdowns and the scaling back of prevention services. Early years services, home to school transport, and children’s placements are becoming particularly acute, alongside the impact of SEND demand on DSG budgets.

Social care can represent 50-80% of total revenue spend[1] (for councils with this responsibility) and universal services suffered major cuts during austerity.This has created challenges for local politicians because it is universal services which are most visible to local electors, who are often asked to pay increased council tax bills.

A service-based way forward for councils

Councils need to develop service-based financial resilience strategies, that are owned by the relevant service director and team, who recognise the role that finance has to play in supporting and monitoring their delivery.

Finance and other support services such as HR and policy and performance should be seen as enablers and not solution finders. The solutions should sit within services, but support services need to be effective in how they prioritise the use of their resource, and agile in prioritising their support.

Taking a risk based approach will prioritise financial team resources heavily towards high risk areas (such as social care). But it does not eliminate the need for robust financial controls for those areas considered less high risk.

The key opportunity identified during the roundtable was understanding future trajectories and forecasts on costs and demand. It was recognised that the socio-economic and demand pressures impacting on children’s services had not been effectively predicted. Effective service line forecasting (both throughput volumes as well as demand numbers) is critical for effective financial planning and can mitigate the “us vs them” discussions between finance and services.

Contributing factors that councils could influence

Whilst austerity is considered to have not left local government and it is never easy to predict where spending pressures will fall over the medium term, it was recognised that councils do have some opportunities to control or influence the contributing factors to current pressures. Examples given included:

Given the significant level of uncertainty facing local government – from the level of its funding after 2020/21, how the new government’s policies will affect the sector, and how Brexit will impact on councils and the places they serve - it is more critical than ever to consider the different scenarios and interdependencies that may impact a council, its communities and local businesses.

Having long-term financial forecasts, underpinned by various scenarios and sensitivity analysis based on continued horizon scanning, will become ever more important. Councils, facing unprecedented resource constraints, and having been hollowed out by approaching ten years of austerity, need to make this a priority for their financial planning, and risk and opportunity management.

Take the time to develop your own sustainable holistic financial strategy and action plan with help from our local government specialists, data science and modelling teams.

*The financial forecast is based on the latest 2018/19 revenue outturn data. A council is 'at risk' of financial failure when its reserves fall below 5% of overall net revenue expenditure.