The Megabuyte Emerging Stars report is a must-read for companies and investors wanting to identify the newest opportunities and where to invest when looking at emerging in UK tech companies.

With most small tech firms describing themselves as ‘disruptors’, it's difficult to distinguish the true change-makers from the elevator pitch dreamers. The Megabuyte Emerging Stars Report solves this with a leaderboard of the UK's 25 best-performing smaller software and ICT businesses, based on solid financial analysis.

The report uses five key metrics, based on revenue growth, margins and overall size to score public and privately owned UK tech companies that have sales between £3 million and £10 million. Its power to predict a bright future is shown in the outcomes of the previous year’s list: trade buyers snapped up five of the 2019 cohort, while another two added bolt-on acquisitions of their own. Many have grown to the point that they no longer qualify as ‘emerging’.

As to be expected, this year’s Emerging Stars companies favoured growth over profitability. As a group, these UK tech firms delivered average organic growth of 45% against average adjusted EBITDA margins of 8.4% in their last financial year.

Broadly in line with the previous year, the 2020 Emerging Stars comprised 13 owner-managed companies, nine that received external funding and three listed on public markets. While this reflects a lack of appetite for IPOs in this size range, it leaves plenty of room for deals.

ICT services slightly outnumbered software companies, 14 to 11, although the Overall Winner and Fastest Growing Company accolades went to the latter. Telecoms and ICT consulting were the most populous peer groups (five companies each). However, they were out-scored by data centre and hosting services, which achieved the highest score for the second consecutive year.

Grant Thornton UK LLP and Natwest have proudly partnered with Megabuyte to sponsor the Megabuyte Emerging Stars programme since 2017. 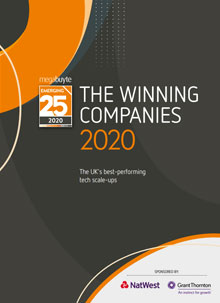