The lack of international consensus on taxing the digital economy is creating a vacuum of uncertainty. So, what’s coming up on the horizon and how can your business deal with the implications?

Commerce is increasingly digital. Yet, the global tax system is still geared to the needs of a traditional ‘bricks and mortar’ economy. The OECD’s Base Erosion and Profit Sharing (BEPS) Action Plan recognises the need for modernisation and has achieved quite a lot since the issue of its reports in October 2015. However, specific recommendations on digital taxation have been limited and the OECD’s calls for an international consensus on the way forward have so far been unheeded.

In this article we see how individual countries are filling the vacuum with their own varied set of tax measures, which continues to create uncertainty and heightens the risk and complexity of tax management for multinational enterprises (MNEs). And while it’s the internet giants that the media and tax authorities have in their sights, it’s also small and mid-size MNEs that are likely to bear the brunt of the changes and face the greatest challenges in managing them.

Can the tax authorities keep up?

Businesses still tend to be taxed where they have a physical rather than virtual presence and taxation continues to be built on traditional product and service lines. The digital economy also heightens the challenges of attributing and transferring costs and returns along the OECD-defined development, enhancement, maintenance, protection and exploitation (DEMPE) lifecycle of intellectual property and other intangible assets.

Both businesses and tax authorities are finding it difficult to define where value creation occurs and how to align that with traditional taxing standards. Many tax authorities believe that they’re missing out on significant amounts of tax from digital businesses that operate in their jurisdiction, but don’t have the physical presence and hence permanent establishment status under current rules. Most have been playing catch-up in response, tweaking their creaking legislation, rather than engaging in a fundamental.

You should think about where and how you create value within an increasingly digital economy, how this maps against your transfer pricing and profit attribution and the extent to which you might be at risk of challenge from the different tax authorities where you operate, virtually as well as physically.

Addressing the tax challenges of the digital economy

The digital economy is the new frontier of taxation. Yet, the OECD BEPS Action 1, ‘Addressing the tax challenges of the digital economy’ offers little in the way of specific guidance beyond asking its member states to come together to ‘establish international coherence in corporate income taxation’. For example, Action 1 doesn’t specify what would constitute a taxable presence (nexus). This international consensus hasn’t yet materialised. The full article explains some of the reasons why.

Although there are difficulties in securing an international consensus on digital taxation it doesn’t mean that the issue can be ignored. Not only are individual states taking matters into their own hands, but tax issues surrounding the digital economy are being drawn into wider reforms.

The overall direction of travel would appear to be a move away from a physical presence as the defining feature of a taxable nexus towards an economic presence, which could be virtual. You should determine whether the permanent establishment status of your various operations, physical and virtual, are still valid as a result of legal rulings and local changes in tax rules.

The changes to the taxation of digital business should form part of a wider review of whether your current tax management is fit for purpose.

Get up to speed

While the international consensus on taxation of digital revenues has yet to materialise, taxing the digital economy is very much a live issue and can’t be ignored. In this new world of increased complexity, Taxing the digital economy [143 kb] [ 143 kb ] explores what's coming up on the horizon and how your business can deal with the implications.

If you would like to discuss any of the areas raised in this article, please contact Wendy Nicholls. 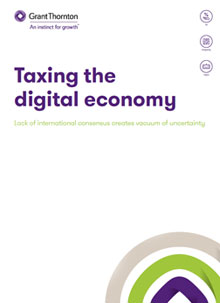