The Emerging Stars report talent spots the UK’s future mid-market leaders, highlighting the top 25 companies from a list of almost 200 earlier stage public and privately-owned companies. The most important metric for smaller tech businesses is growth.

Emerging Stars companies delivered average organic growth of 37% in their last financial year. This compares to 16% and 24% for the most recent Quoted25 and Megabuyte50 companies respectively. Average EBITDA margins are 15.8% despite many businesses investing heavily to encourage growth.

Interestingly, comparing these traits to last year’s winners shows that the 2018 Emerging Stars have, on average, a greater balance between growth and profitability. The class of 2017 yielded a higher one year average organic growth rate (46%) and revenue CAGR over the last three/four years (38%), but at the expense of profitability (average EBITDA margins were -0.6%).

SecureCloud+, a provider cloud and related IT services to defence and public sector users, was announced as the Fastest Growing Company in the Megabuyte Emerging Stars awards. As an ICT services company SecureCloud+ has grown rapidly and profitably off the back of a small number of advanced projects primarily for the UK armed forces. In the year to March 2017, both revenues and EBITDA broadly doubled, to £3.4 million and £0.6 million respectively. 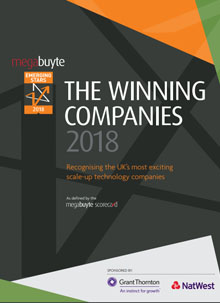