Recent deals in the food and beverage sector

Continued interest from international acquirers and three mega-deals resulted in a busy summer for the industry.

Continued interest from international acquirers and three mega-deals resulted in a busy summer for the industry. A total of 43 deals1 were announced in Q3 involving a UK/Irish acquirer and/or target (Figure 1). Whilst this represents a decline on the volume of deals in the previous quarter, which saw 62 deals take place, deal activity for the year is similar to the corresponding period in 2016. There have been 146 deals in 2017 to date compared to 152 for the equivalent period last year.

The long-awaited sale of UK poultry producer Moy Park to US based Pilgrim’s Pride added £1 billion to the quarter’s disclosed deal total. This was closely followed in value by the sale of Cott’s bottling activities in the UK, US and Mexico to Refresco for £963 million.

With the domestic to cross-border ratio heavily weighted in favour of overseas acquirers at 40:60, this quarter has seen no let-up in the appetite of international acquirers. Of the 34 deals involving UK/Irish targets, 48.5% of the acquirers were overseas – this compares to 31% for the first half of 2017, and a similar level on average for the whole of 2016. 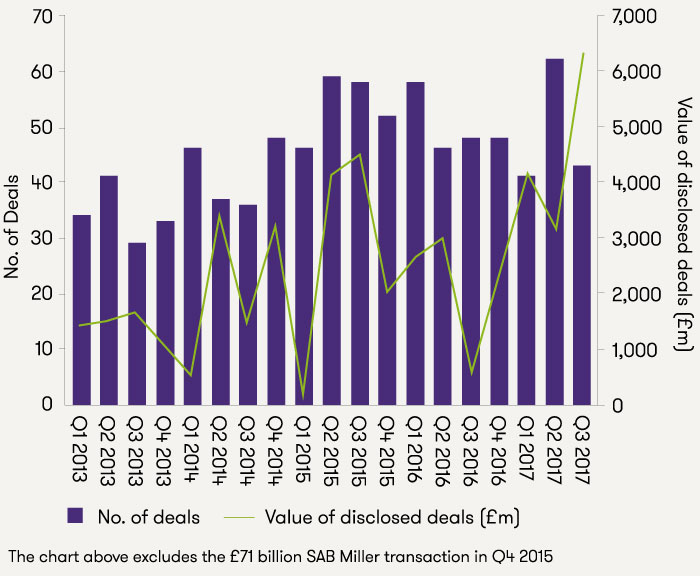 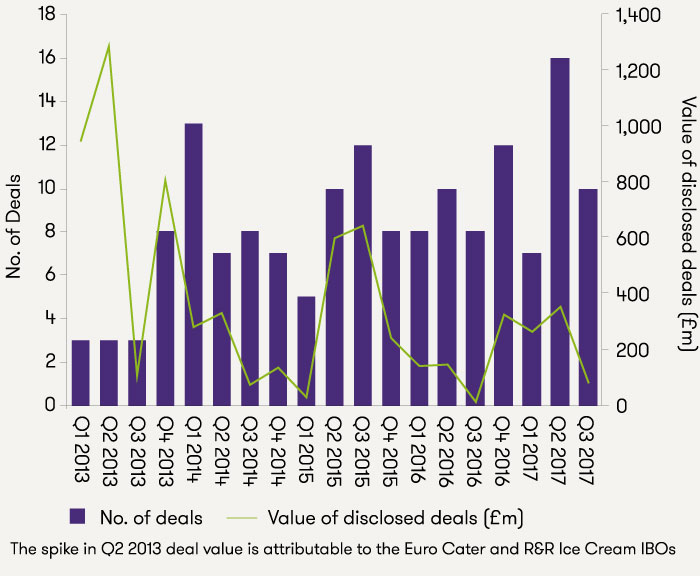 Other PE deals in the sector were focused on the booming pet food and ‘free from’ markets.

Whilst the alcoholic beverages sector continued to be a steady driver of deal activity in Q3, it was the protein market that continues to dominate deal activity and value. The four key deals this quarter were led by the £1 billion acquisition of poultry processor Moy Park, which saw its ownership change hands for the third time in the past ten years.

Elsewhere in the protein sector, pig processing company Tulip, part of the Danish Crown group, announced its acquisition of UK pig producer Easey Holdings. The Competition and Markets Authority (CMA) has launched an investigation into the deal so this remains one to watch.

Cherry Valley Farms, a leading supplier of Peking ducks has been acquired by two Chinese companies, Beijing Capital Agribusiness Group and CITIC Modern Agriculture Investment Company. With an overall market share of over 75%, Cherry Valley Farms sells its ducks to more than 60 countries and regions around the world.

Most recently, Cargill of the US and Faccenda Foods, announced a joint venture in the UK (subject to clearance by the relevant regulatory authorities) focused on their chicken, turkey and duck businesses.

It would be remiss to comment on this sector without mentioning the investigation at 2 Sisters Food Group, which unmasked poor hygiene standards and the altering of food labels. Ranjit Boparan, owner of the Group which produces a third of all poultry products eaten in the UK, recently appeared before a parliamentary committee to address the allegations.

Amazon sent shock waves through the food and beverage sector over the summer when it bought Whole Foods. The e-commerce giant’s move is one of the most obvious examples of how traditional routes to consumers and brand choice are being upended.

The deal not only gives Amazon access to a bricks and mortar format but also provides it with vital consumer shopping data and allows them to access 365 own-label products. This, combined with the growth of voice search, could have a huge impact on the food and beverage market. When you ask Alexa to add butter to your cart, whose brand is likely to go in there?

Continuing to find new ways to reach consumers directly and adapt their portfolios to embrace fast-moving trends will remain at the forefront of FMCG’s minds. It will be interesting to see what niche and nascent sectors the global food and beverage groups target and we expect we will see further interesting announcements from their accelerator programmes throughout the next twelve months.

The auction for Unilever’s spreads business is now well underway this Autumn. Other key assets coming to market include healthy snack supplier Graze, whose private equity owner The Carlyle Group has appointed advisers; and coffee and food chain Pret a Manger which is the subject of talk around a possible IPO in the US and takeover approaches.

The impact of the UK Competition and Markets Authority verdict on Tesco’s acquisition of wholesaler Booker is also likely to have wider ramifications for the market.

Despite political and economic uncertainty, M&A activity in the food and beverage sector remains strong. However, businesses and investors will no doubt be looking for further clarity from the government as the details of a Brexit deal are hammered out and we head into a new year of investment and growth decisions.