Economic growth in the UK appears to have slowed during 2018, but forecasts have been revised upwards over the coming years. The outcome of Brexit and whether a deal can be reached remain the key uncertainties over future prospects.

Read on for a focused assessment of a small number of key national and international economic trends to help inform and shape plans and investment decisions as well as help to identify new opportunities.

The 2018 Budget set out by Philip Hammond was designed to prepare for a post-Brexit world and honour the prime minister’s pledge to end the era of austerity. This involved a net £5 billion tax giveaway over the period to 2023-2024 and provided some indication of government Brexit plans.

GDP growth has been modest in 2018 – The Office of National Statistics (ONS) estimated it to have increased by 0.4% between Q1 (January to March) and Q2 (April to June) 2018. The Office of Budget Responsibility (OBR) has subsequently revised down its forecast for 2018 from 1.5% growth to just 1.3% growth.

Growth is expected to improve slightly with the OBR revising estimates for 2019 up to 1.6%, largely reflecting an upward revision in projected labour market participation as employment surpasses expectations.

The most immediate risk confronting the economy is the possibility of a disorderly exit from the EU next March. This could have severe short-term implications for economic activity, the exchange rate and asset prices.

The key economic indicators covered in this report are:

Download the quarterly economic briefing [ 549 kb ] for a short overview of the current trends along with a brief analysis of what it means for businesses. We have also included an overview of the latest government and political situation. We hope that these provide additional insight and context.

The next quarterly economic briefing will be published in January 2019 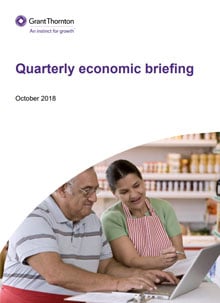