While Brexit continues to cloud the political environment, confidence is slowly starting to return to the UK economy. Though growth remains modest, the Bank of England has justified an interest rate rise with the expectation that conditions will improve over the course of the rest of 2018.

The briefing provides a focused assessment of a small number of key national and international economic trends to help inform and shape plans and investment decisions as well as help to identify new opportunities.

The Bank of England’s Monetary Policy Committee has raised the interest rate from 0.5% to 0.75%. This is the highest level since March 2009. The rate rise will have implications for interest costs for those with residential mortgages that have variable or tracker rates.

UK labour productivity, as measured by output per hour, is estimated to have grown by 0.9% in Quarter 1 (January to March) compared with the same quarter a year ago. This remains below the long-term trend observed pre-financial crisis when growth averaged nearly 2% per annum, and suggests that the ‘productivity puzzle’ remains unsolved.

The key economic indicators covered in this report are:

Download the briefing for a short overview of the current trends along with a brief analysis of what it means for businesses. [ 642 kb ] We have also included an overview of the latest government and political situation. We hope that these provide additional insight and context.

The next quarterly economic briefing will be published in October 2018 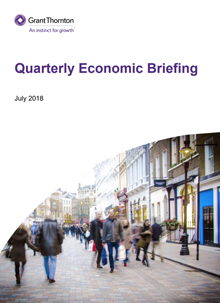