New car registrations down 34.9% in June

Interestingly, the mix between fleet/business and private was very different to previous years. The private market grew strongly in June, with a year on year (YoY) decline of only 19.2%. But the fleet and business market came under considerable pressure, with fleet declining by 45.2% and business declining by 52.6%, suggesting weak demand in those markets.

While we believe that there was a number of tactical registrations towards the end of the month, performance in the private market, although down, was still robust, providing a positive signal of activity in the market. It remains unclear whether this activity is linked to pent-up demand and helped by tactical registrations during the last few days of June and half year (H1).

As expected, diesel continued to suffer and we believe diesel registrations will continue to decline in the coming months, particularly as the improved air quality in the UK has been widely welcomed by the general public. Diesel registrations declined by 64.9% with a market share of 18.2%.

Once again, the only area of growth in the market was in alternative fuel vehicles, especially battery electric vehicles, which increased by 158.6%, reaching market share of 4.7% in the UK. Rumours abound of a possible scrappage scheme in the UK. This is believed to be focused on encouraging drivers to move to lower CO2 emission vehicles, which could result in strong growth in this area of the market over the coming year, although there are some doubts whether the supply of electric vehicles can meet the potential increase in demand.

We have updated our forecasts for best, mid and worst-case scenarios to reflect the changes in June and these can be seen in the chart below. 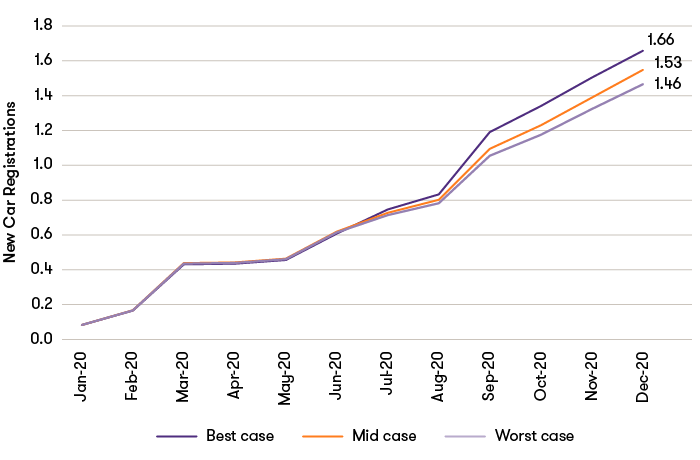 There is a risk that we could have a W-shaped recovery (YoY growth rates), in which this current pent-up demand does not last through Q3 or if there is a shortage of supply of vehicles caused by the closure of the automotive manufacturing plants over the period of March, April and May.

New car registrations are dropping across the world
Also appears under...
Share this page