Increased litigants in person due to lack of public funding, overburdened family courts and courts not being fit for purpose are the top three issues facing matrimonial law as reported in our survey.

Our matrimonial report provides detailed commentary on what is impacting divorce in practice and in principle. We explore where lawyers would like to see changes in legislation and the effect of Brexit.

In addition to identifying some interesting findings on the level of assets in divorce cases, other hot topics covered in the report include the concealment or non-disclosure of assets and information, and details behind divorce cases dealt with by those surveyed.

One such case is that of Tini Owens, considered one of the most controversial judgements of recent months. Mrs Owens’ divorce was refused because, in line with the current law, the factors set out in her petition were not sufficient grounds for divorce. She has now been given permission to take her case to the Supreme Court.  The case has further invigorated the debate about no-fault divorce and we consider this issue in our report. 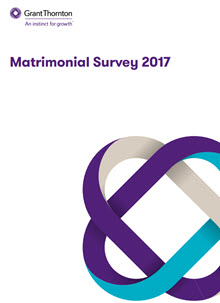