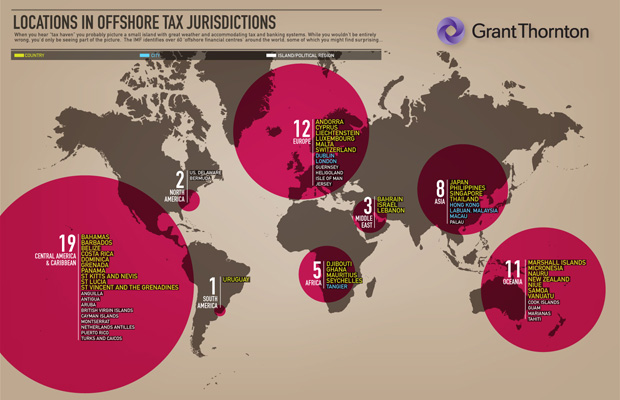 While most people think of the traditional tax haven as being somewhere like Switzerland or Bermuda, there are in fact more than 60 offshore financial centres around the world, according to the IMF.

Our infographic shows the scale and global spread of such offshore tax jurisdictions, locating them by country, city and island/political region…

Click here to view a larger version (opens in a new window).

What is a tax haven?

Tax havens can be hard to define and locate. However, the main feature of a tax haven is that its legal and financial set-up can be used for minimising tax (through avoidance or evasion) by other jurisdictions.

Until recently, secrecy was a major factor in that banks would not easily give up information on their holdings and legal entities to tax collectors. But now the G20 is putting pressure on offshore tax havens to open up their doors and become more transparent in their dealings (or face sanctions), while at the same time granting tax ‘amnesties’ to encourage those with undeclared funds to come forward.

The G20 attacks mean that tax havens face losing their status as attractive places to invest. “This has been a global change brought about by the increasing realisation by the G7/8 nations that they are losing desperately needed revenue post credit-crunch to some of these havens,” says Dave Jennings from Grant Thornton’s Tax Investigations Team.

“Most treasuries knew there was untaxed income in havens but had very little power to get to it in the past. There were few double tax treaties, no tax information exchange laws and it was only through the Liechtenstein whistleblower and the US:UBS case that they got a lot of information.”

Tax havens must now comply with the OECD’s internationally agreed tax standard on exchange of information – those that cooperate will move up a tiered list (and away from “tax haven” status) while failing to cooperate results in being blacklisted. The number of tax exchange agreements issued since 2008 has been astonishing compared to previous years.

Opportunities for disclosure of “secret” funds

The international crackdown on tax havens has been accompanied by a series of tax ‘amnesties’ – including the New Disclosure Opportunity, the Liechtenstein Disclosure Facility and the latest amnesty aimed at those in the medical profession. Together with the growing transparency being forced on offshore jurisdictions, it seems that this infographic may look very different in a year’s time.