Our CFO Insights data tool checks the fairness (or otherwise) of the local government financial settlement for 2016-17.

There has been a lot of debate about the fairness of the English local government funding settlement for 2016-17 in the weeks since its announcement. For many councils, the reductions from previous years were much greater than expected, and as a consequence many struggled, and are still struggling, to see light at the end of the tunnel.

This meant that when the settlement terms were revealed, some councils felt it was worse than expected and was highly likely to result in the demise of non-statutory services in many parts of the country.

Overall, public discussions around the local government funding settlement have been highly charged. Ultimately, as it seems with many of the government's austerity measures, the sheer force of disapproval resulted in a partial, and temporary, softening of its stance. This came in February 2016 in the form of proposals for a £150 million transitional support scheme, to be made available over the next two financial years to those councils with the largest reductions, along with specific policy to support rural councils.

In turn, these proposals triggered further controversy following assertions from some councils that the main beneficiaries of this would primarily be relatively well-off councils in the south of England and that no such facility had been available to other councils in the past five years, including the hard-pressed northern metropolitan boroughs.

In order to develop an objective understanding of the fairness of the funding settlement it is necessary to look at some of the underlying data, and also the relationship between funding and deprivation. It does not detract from the fact that since Spending Review '10, local government as a whole has seen 40% reduction in funding terms and that the scale of savings that different councils have needed to make has provided different challenges in different places.

To create the graphs shown we have used our CFO Insights financial analysis tool, developed in partnership with CIPFA, which offers insight on the financial performance, socio-economic context and service outcomes of every council in England, Scotland and Wales. 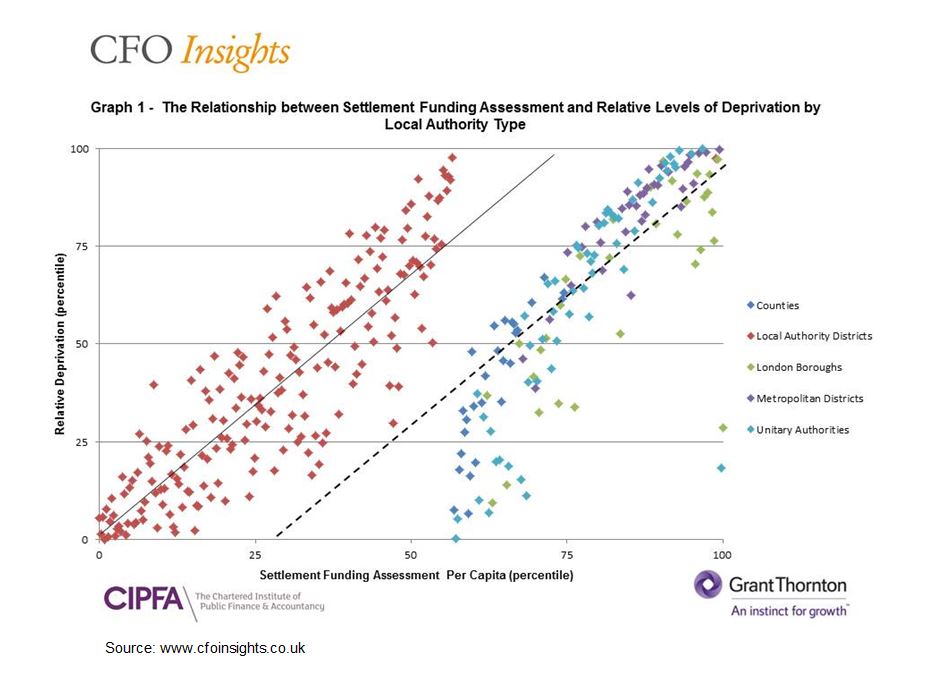 In general the most deprived areas get the most settlement funding on a fairly consistent proportional basis.

Graph 1 (click to view larger) shows the relationship between settlement funding assessment and relative levels of deprivation by local authority type. The two groupings are, on the left-hand side, the district councils sitting within the two-tier local government configuration, and on the right, counties and single-tier councils of all types. The latter appears further to the right in the chart simply because of the greater financial scale of operations for these councils, which includes education and social care.

Using Graph 1 to show relative deprivation as an indicator, single-tier and top-tier councils in areas with relatively low levels of deprivation do seem to have benefited more from the settlement than their contemporaries, reflected by the steepening of the trend line in the bottom quartile towards the vertical. This also seems to indicate that no district council receives more in settlement funding than any single or top-tier council, even though the general trend suggests that we might expect a degree of overlap. 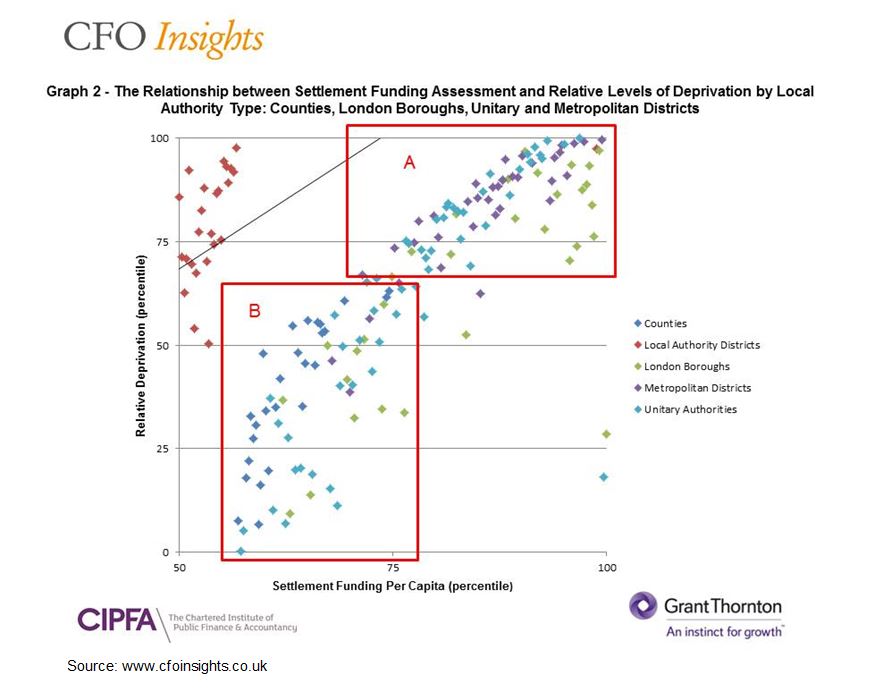 Clearly, deprivation on its own is an imperfect measure of relative entitlement to central government funding, but the strength of the correlations we see suggests that it is a useful way of understanding the question of 'fairness' and can contribute to the debate. Other factors that are useful to consider include income from collected council tax and business rates. 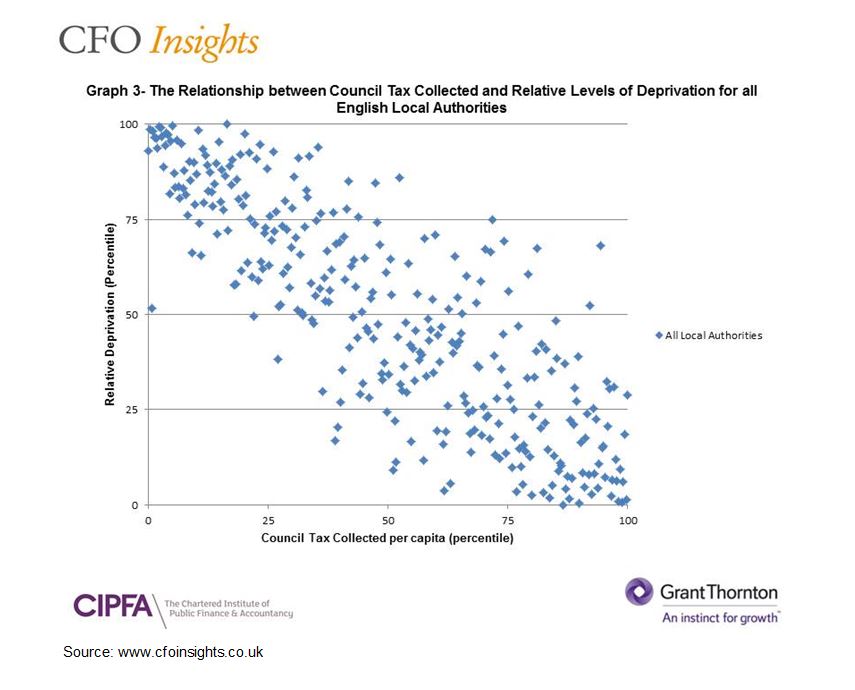 If we broaden the picture to look at the amount of council tax collected per head of population, as shown by Graph 3 (click to view larger), we observe a strong negative correlation between the level of deprivation and the level of income generated, illustrating that more deprived areas are less able to generate their own income through council tax. 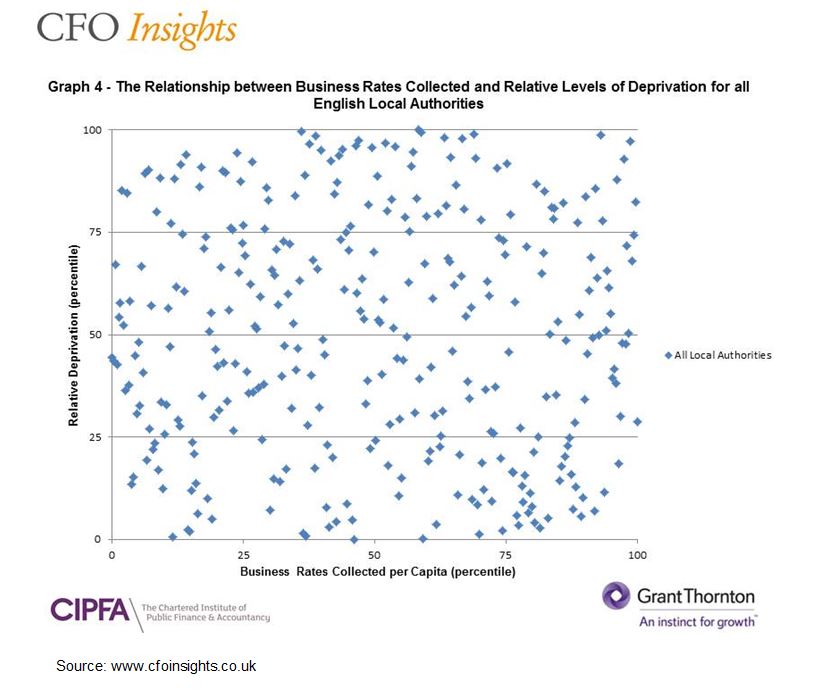 There is no clear correlation between deprivation and the level of business rates collected in a locality, shown by Graph 4 (click to view larger). Therefore a relatively affluent area with low deprivation may not necessarily have access to proportionally high income from business rates.

There is currently an inherent artificiality about the way that settlement funding and business rate redistribution is calculated. This is rooted in historic spending patterns that may not reflect the current situation in any particular locality. Arguably, this affects county councils more than others due to the way that local taxation (and new homes bonus) is allocated. This is likely to be exposed with the coming changes to the funding methodology for local government.

One of the other difficulties that county councils face is that a higher proportion of their expenditure is subject to demand pressures – notably in social care – so they have less elbow room for reducing the cost of discretionary services.

Is the funding settlement fair?

Our examination of the underlying data does suggest that, broadly speaking, the 2016/17 funding settlement for English councils is fair in that it follows the level of relative deprivation quite closely.

However, it also seems to suggest that the settlement favours some single and top-tier councils that have relatively low deprivation, although the picture is complex.

The conclusion must be that the artificial, and somewhat arcane, way in which the settlement is calculated is responsible for some inequality in the system. The hope is that the new more localised system of funding local government will root out some of these problems and enable a fairer system for supporting local services.