Has Brexit hit home for facilities management yet?

Welcome to Issue 17 of Insights into facilities management (FM), our quarterly update including analysis of M&A activity in the sector and insights into the changing marketplace to keep you informed.

There were continued high levels of deal activity in the FM sector throughout Q2 and Q3 2016 suggesting that Brexit has had little impact for strategic M&A. Whilst many are adopting a business-as-usual approach and maintaining their growth agendas, the full impact of the vote to leave the EU could still have implications for some in the sector.

If deal activity remains strong in Q4, it is possible deal volumes will exceed the 97 recorded in 2015; and we could see activity hit the 100 deals mark for the year, last achieved in 2011.

Interestingly, Q4 could see the 1,000th FM deal since we started recording data in 2007.

Private equity saw its most active Q3 since the start of 2010 with eight deals. The most notable deal in Q3 was energy infrastructure and services investment house, First Reserve Fund XIII LP, acquiring £600 million plus revenue Morrison Utility Services Group Ltd, a Stevenage-based utility network and infrastructure services company, for an undisclosed sum. The deal represents an exit for Bregal Capital and Motion Equity Partners and a secondary buy-out for Morrison Utility Services.  The high level of private equity deals appear to reflect investors’ appetite for FM as a broadly defensive sector that benefits from long-term contracts and stable, recurring revenues, as well as the relative strength of the debt market in more uncertain times.

The underlying trend of consolidation has continued undeterred despite the prospect of Brexit. The devaluation of Sterling has in turn provided overseas buyers with a generational buying opportunity. Looking forward, labour supply and supply chain pricing will be key areas of focus for the sector. 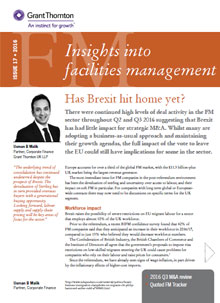