Following the financial crisis the Financial Conduct Authority (FCA) and Prudential Regulation Authority (PRA) have been pursuing a process of rule-making, beginning with the Banking Reform Act 2013, intended to change the way that individuals working in financial services are regulated. These new rules aim to improve professional standards and culture within the industry by increasing individual accountability. Key features of the rules include the Senior Managers and Certification Regime (SM&CR).

Watch our video below on the impact of the new Senior Managers and Certification Regime due to come into force in 2018.

In this video, Grant Thornton’s David Morrey, George Littlejohn of the Chartered Institute for Securities and Investment; and Simon Morris, partner at law firm CMS, discuss their views on the impact of the Senior Managers and Certification Regime; and what firms can do now to prepare for the upcoming changes.

Over the past year banks and insurance companies have been operating under versions of the SM&CR regime. From their experiences we know that the challenge of implementing SM&CR has been significant and its implications, for both the organisations and their senior individuals, is still being understood.

Government policy is now to have SM&CR in place for all other financial services firms during 2018. In the meantime, the FCA is due to issue its consultation on the wider rollout of SM&CR in the second quarter of 2017. This consultation will outline how the version of SM&CR that will apply to all other firms, approximately 55,000 of them, will differ from the banking and insurance versions. It will also likely set timetables and landing slots for re-approval that firms will need to meet if they are to continue to be authorised when the new regime goes live.

What is a Senior Management Function?

Senior Management Functions (SMFs) replace the existing Significant Influence Functions. These need to be individually approved by the FCA and accompanied by bespoke, accurate and detailed role responsibilities (there will be no more generic roles and much less shared responsibility).

It is important to remember the genesis for the new rules was the financial crisis and the sense that senior individuals in failing organisations were not held accountable.

The response? SMFs are required to take reasonable steps to ensure the activity they are responsible for is controlled effectively, that it complies with regulatory requirements and standards and that reasonable steps are taken to ensure any delegation of responsibilities is to an appropriate person and their work is appropriately overseen.

For the avoidance of doubt, if something does later go wrong, a lack of evidence that reasonable steps have been taken is likely to constitute an actionable case against the SMF in question. The FCA’s powers to ban, fine or prosecute individuals is unlikely to change, however these new standards will make any of those actions much harder to defend.

Where does Certification come in?

Firms will need to self-identify individuals who are not SMFs but who could inflict significant harm on a firm, its customers or on markets. This embraces virtually all individuals who are customer or market facing, as well as many in internal facing roles.

Whilst Certification staff are not approved by the FCA, the firm has to formally assess their behaviour and issue an annual certificate to confirm that they have met the FCA’s standards of conduct and Fitness and Propriety rules. The FCA needs to be notified of anyone assessed as failing these standards and the failures will have to be included in any employment reference provided on that individual. Either of these outcomes is likely to be career limiting for those who are impacted. The FCA will also have a right to take direct action against these individuals.

Getting ready for SM&CR

The good news for the 55,000 firms that will need to adopt SM&CR is that there are lessons to be learned from the experience of the banks and insurers. Those that have adapted well have taken a long look at their executive decision making and simplified and streamlined their senior accountabilities. Those that have fared best of all are firms who have a strong culture of accountability, or have used SM&CR as the vehicle to drive that culture into the business.

However, these success factors for implementing SM&CR take time to achieve and because of that, we believe the best outcomes from this step change in regulation will be achieved by the firms that begin their journey early.

For more information or to discuss the challenges of SM&CR, please contact David Morrey. 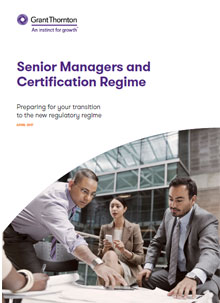 Find out more on SM&CR: