Impact at the heart of a charity

Should every charity aim to be unnecessary? This bold and thought-provoking idea is often debated in the charity sector; it is what fundamentally marks charities as different from the private sector.

The principle is simple: if a charity succeeds in definitively achieving its mission, there will be nothing left for it to do. A charity should only exist if the need or detriment persists. The question is how do you know if you have achieved that mission? Or more pertinently, how do you know you’re heading in the right direction as quickly as you can?

These questions emphasise the importance of charities measuring their impact effectively. Doing so indicates whether charities are implementing their strategy successfully and advancing their cause. While demonstrating financial integrity is critical, the conversation with donors, funders, beneficiaries and the wider public is thankfully becoming more advanced and impact measurement can no longer be viewed as a ‘nice-to-have’ that provides a few numbers in the annual report. It is increasingly taking its rightful place as the ultimate measure of a charity’s success or failure.

Impact is a universal concept; countries across the globe are engaging in the same debate about efficacy as colleagues in the UK. Over the last six months, we have carried out research built on conversations and roundtables with charity leaders across the globe. This has culminated in our new report, Impact in action. We have gone into depth about what impact means to different charities, the challenges they face in measuring it, and the innovations developed to overcome these challenges.

The conversations with charity leaders that we held for Impact in action revealed that, for charity trustees to hold their executive to account effectively, understanding of impact is vital. Take, for example, deciding where to direct resources. Does a charity spend funds now on something that is likely to have clear short-term outputs and measurable results? Or does it invest the funds for a longer-term impact return that is a magnitude greater in a decade? A trustee must understand impact, and how it generates the charity’s strategy, to inform this decision.

Boards are also under greater scrutiny externally and a valid question trustees should be asking is whether they are comfortable with the impact claims that their charity is making. Despite recent issues in the sector, impact results rarely receive the scrutiny from the board that is afforded to the financials.

The importance of culture

During the research a common view was that the way a charity measures impact both defines and is shaped by its culture.

Getting impact measurement right must start internally. If a charity is going to be open and honest externally it must first be so, internally. It is also crucial that everyone in the charity is aware of, and focused on, the final goal. Activity that is extraneous could be removing resources that could be used more fruitfully elsewhere.

Impact is a risk management issue

Charities take on very significant risks to achieve their mission because they believe that the risks of inaction are even greater to society. Therefore, impact is inherently linked to risk - both the risk of outright failure or the more subtle risk of only achieving partial success. But do trustees completely grasp this implication?

Thinking about risk appetite sets the foundations for impact that can be achieved and expected. A UK trustee at a charity with international reach told our researchers: “I would be surprised if any charity board now were not engaged in a conversation about risk appetite. It leads to a greater relationship and understanding between [management] and trustees.”

Putting impact at the heart of an organisation can be transformative, but it has to be absorbed by everyone. Done well, impact can be scaled to the size of an organisation and it need not result in multitudes of KPIs or paperwork. But it also means staying the course and keeping impact front and centre. Otherwise, the danger is that impact measurement is ultimately misunderstood and undervalued. 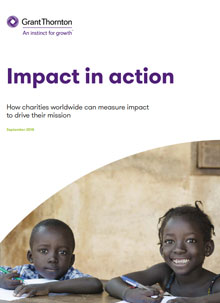 Sign up to get the latest charity sector updates by email